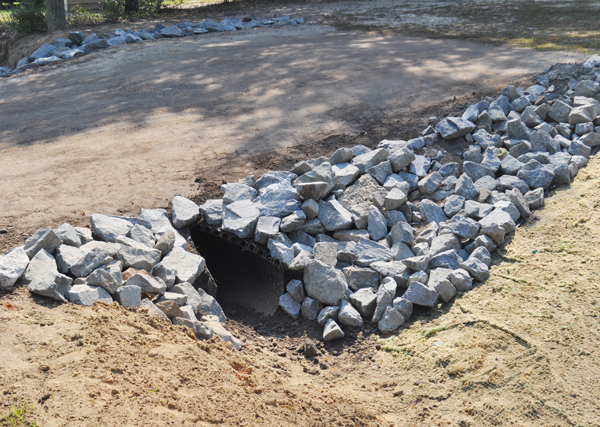 The Rev. Jacquelyn Porter, pastor of New Life Deliverance Missionaries Church, is worried that these rocks may cause a safety hazard to the church's children when they play outside.|Jeff Findley

By JUSTIN SCHUVER
Managing Editor
The Rev. Jacquelyn Porter, pastor of New Life Deliverance Ministries, came before the Decatur County Board of Commissioners on Tuesday morning to voice her disgust with the county’s recently-done work to fix an erosion problem at her church.
The church, located at 115 Lynwood Drive, has had erosion and drainage problems for a while. Porter has said in previous board meetings that road paving done in the Dollar Subdivision in 2004 was done incorrectly, and that soil had eroded away to create a dangerous ditch in front of the church.
At the Tuesday, Aug. 23, board meeting, Porter requested for the county to fix the ditch problem. County Attorney Brown Moseley said at that meeting that “if our road work caused the problem, then this is our liability.”
Porter said at Tuesday’s meeting that work had been done at the church, but it was not satisfactory. She said there is still a slope along the ditch, but the bigger problem are large rocks that have been placed on either side of the driveways.
“Our kids are in danger of being injured,” she said. “My concern is our land being leveled and coming back to where it was (in 2004). I can even sleep with the slope, but I can’t sleep knowing there are a bunch of rocks out there that could hurt our people.”
County Board Chairman David C. “Butch” Mosely told Porter that the rocks were necessary to prevent additional erosion on the work that had been done.
“If you have a heavy rain, all that pretty work that’s been done will be washed away,” he said.
Porter contended that she had spoken with a county public works employee, who suggested the rocks were used because they were “the cheapest” solution.
“Instead of the cheapest way, I want the right way,” she said.
Porter said she had been told the rocks would need to be in place anywhere from two to five years, in order to allow the drainage water flow to create a natural pattern that would stop the runoff erosion problem.
Porter also said that her problems were only a symptom of a larger problem, because the commissioners do not work together.
“How can I trust you all, when you literally attack each other’s character and say bad things about each other (when other commissioners are not present),” she said. “I want the people to know what’s in this county, who they have representing this county — a bunch of guys who sit around and call people on the phone and attack each other’s character.”
Near the end of the public participation session, Porter began to raise her voice slightly, prompting Mosely to bang his gavel.
“Okay, we’re getting out of order,” he said.
“No, you’re the one out of order, Mr. Mosely,” Porter said. “I promise you, if I have to get my whole life savings, I’ll see you all in court. … Bunch of crooks! It won’t be the last time you see me.”
Earlier in the meeting, Mosely had said the commissioners would get together with county staff and see if anything could be done to improve the church site further.