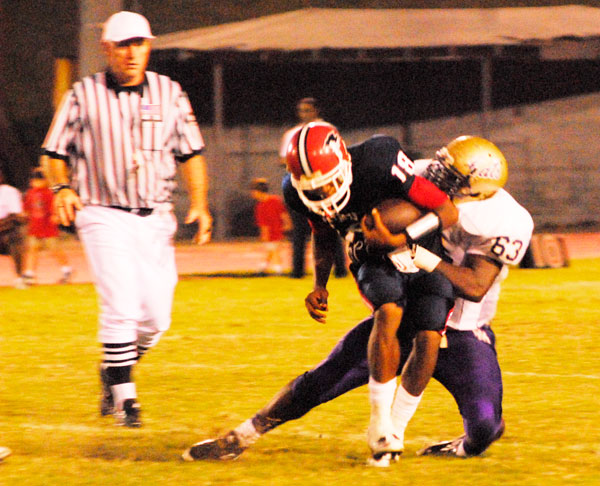 By JOE CRINE
Sports Editor
Coach Ed Pilcher thought his Bainbridge High School Bearcats football team had another strong defensive effort in their 23-20 three-overtime victory over the Westover High School Patriots Friday night in Albany.
“Our defense played well for the third consecutive week,” said Pilcher, whose team is now 3-0. “Our offense is getting better. It is a work in progress. I thought we were in control of the game until late in the third quarter.
“We were leading 14-0 when Westover picked up a fumble and ran it in for a touchdown. Then, in the fourth quarter they scored  on a long pass and ran in for the two-point conversion to tie it up 14-14. Give Westover credit for getting back in the game.”
Pilcher said he thought his offensive line did a good job Friday night.
“Our offensive line is getting better every week,” he said. “They opened some creases for our running backs. Terry Lewis ran the football extremely well.
“I thought two things hurt us Friday night. The first was our offensive turnovers and the second was losing our composure at critical times.”
With the score tied 20-20 and facing fourth-and-1 in the third overtime, Pilcher decided to send Daniel Provence in to kick what proved to be the winning 23-yard field goal, rather than go for the first down.
“Our defense had played well all night and we were confident that they could hold Westover if we made the field goal,” Pilcher said. “We also had confidence that Daniel Provence could make the field goal. Our defense held Westover to minus yardage on their last possession to seal the victory.”
The Bearcats will have an open date this week before traveling to Warner Robins on Saturday, Sept. 24, to open their Region 1-AAAA schedule against the Northside-Warner Robins High School Eagles. Kickoff will be at 2 p.m.
With the open date this week, Pilcher said he and his staff will probably work with the younger players the first couple of days.
“We have a lot of young players and it will be good to get them some reps,” he said. “We will work with our regular players Thursday and Friday, then go out scouting future opponents Friday and Saturday.”
Northside-Warner Robins will host the Lakeside-Evans High School Panthers on Saturday night.