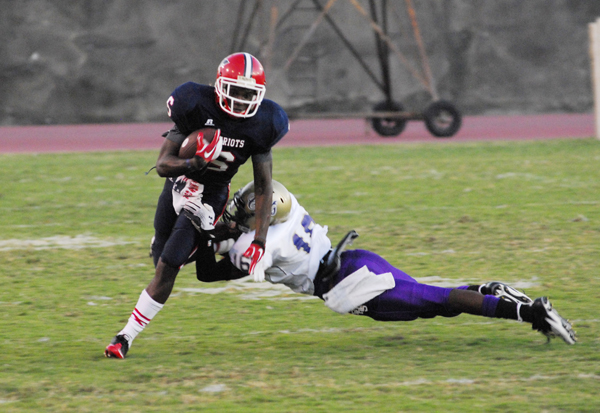 BAINBRIDGE JUNIOR defensive back George Clemmons takes down Westover quarterback T. J. Wester after he tried to break away for a run in Bainbridge’s 23-20, triple-overtime win at Westover on Friday evening.|Jeff Findley

By BRENNAN LEATHERS
and JOE CRINE
News Writer
and Sports Editor
ALBANY — The Bainbridge Bearcats needed three overtimes to defeat the Westover Patriots, 23-20, on Friday night at Albany’s Hugh Mills Stadium.
The winning points came from Daniel Provence’s 23-yard field goal in the third overtime. An earlier potential game-winning field goal attempt in the second overtime had gone wide.
After Provence’s kick put Bainbridge ahead 23-20, Westover got the ball back on the Bearcats’ 25-yard-line with a chance to win the game with a touchdown. The Bearcats’ strong defense and some costly penalties caused the Patriots to go backwards, and they found themselves facing a fourth-and-21 from the Bainbridge 26. Westover’s last-second pass was incomplete, and the Bearcats were able to celebrate their hard-fought win.
Bainbridge (3-0) will be idle next Friday before the Bearcats travel to face Northside-Warner Robins on Saturday, Sept. 24, at 2 p.m.
After Bainbridge fumbled the ball over to Westover on the Bearcats’ first possession of the game, the Patriots’ Ben Fowler missed a 24-yard field goal on his team’s first drive, with 7:57 left in the first quarter.
With 10:26 left in the second quarter, Bainbridge’s Terry Lewis ran for a 72-yard touchdown, and Provence added the extra point to put Bainbridge ahead 7-0.
Lewis broke away again for a 46-yard run late in the second quarter, but a couple of Bainbridge penalties and a Westover interception ended the Bearcats’ drive.
Lewis returned the second half kickoff to Westover’s 47-yard line to put the Bearcats in good field position. Wtth 10:43 left in the third quarter, Lewis ran for a 42-yard touchdown to make the score 14-0. The two-play drive also included a 5-yard run by Aaron Calloway.
Bainbridge later fumbled a punt return, giving Westover the ball deep in Bearcats’ territory. However, Dontavious Baulkman intercepted a T.J. Wester pass with 6:27 left in the third quarter and returned it to the 26-yard line.
On the ensuing drive, Lewis fumbled and Westover’s Anthony Hill picked it up and ran for a touchdown with 4:52 left in the third quarter. Fowler’s extra point attempt was no good, making the score 14-6 in Bainbridge’s favor.
On a fourth-and-1 with 2:10 remaining in the third quarter, Lewis had a 1-yard carry for a Bainbridge first down at Westover’s 19. However, on the next play, Lewis fumbled and Westover again took over possession.
Shortly after the start of the fourth quarter, Bainbridge’s Rodney Glenn intercepted a pass to give the Bearcats the ball at their own 40-yard line. Soon after, two penalties against Westover on the same play moved the ball to the Patriots’ 32-yard line.
Bainbridge quarterback Quincy Fortson carried to the 21-yard line for a first down. A face mask penalty against Westover gave Bainbridge a first down at the Patriots’ 8-yard-line with 9:31 left. The Patriots’ Don Mills stripped the ball away from Lewis, returning possession to Westover at their own 13-yard line.
Octerious Jackson caught a 68-yard touchdown pass from Wester with 7:03 left in the fourth quarter. The Patriots attempted a two-point conversion and Dalviness Greene ran in the end zone to tie the game at 14-14. On the ensuing kickoff, Bainbridge’s A.J. Miller returned the ball to the Bearcats’ 42-yard line. On a fourth-and-2 on Westover’s 39-yard line, with a little over 4:30 left, Lewis rushed forward but came up just short of the first down, returning possession to the Patriots.
The Bearcats’ defense, aided by Westover’s continued penalties, forced the Patriots to punt on fourth-and-19 from their own 28. Bainbridge took over the ball at their own 37 with 2:27 left.
A.J. Miller caught a pass from Fortson with 1:03 left in the game, to give the Bearcats a first down at the 50-yard line. The Bearcats faced a fourth-and-14 situation with 35.5 seconds left, and Paul Soden eventually punted the ball to the Patriots’ 13-yard line with 26.8 seconds left.
Westover had a first-and-10 from their own 25-yard line with 6.3 seconds to go. Wester took a knee on the next play, to send the game to overtime.
Bainbridge had the first possession of overtime from the Westover 25. Fortson ran in for an apparent score in the first play of overtime, but the ball was called back for an aiding the runner penalty. On the second play, the Bearcats were called for illegal motion. Two plays later, Lewis ran the ball to the Westover 4- yard-line and a first down.
Fortson again ran in to the end zone, but the Bearcats were called for an illegal shift. An equipment violation against Westover moved the ball to the 4. Fortson then ran to the 1-yard line.
Facing a fourth down 2 yards out of the end zone, Fortson kept the ball and ran in for a touchdown. The extra point attempt was no good, due to a bad snap; Provence picked up the ball but was tackled.
An unsportsmanlike penalty against the Bearcats meant Westover started their overtime possesion from the seven-and-a-half yard line. Wester kept the ball and was tackled by Baulkman, but a dead-ball personal foul created a fourth-and-2 for the Patriots. Westover’s Greene scored to tie the game at 20-20, but the Patriots’ extra point attempt was also no good, forcing a second overtime.
Westover had possession to start the second overtime. The Bearcats’ defense and a Westover penalty forced the Patriots to a fourth-and-20 from the 25-yard line. Wester’s long pass attempt was intercepted by the Bearcats in the end zone.
The Bearcats took over on the 25-yard line. Facing a fourth-and-5 from the 7-yard line, Provence came on to attempt a field goal. A delay of game penalty was called against the Bearcats, creating a 32-yard kick attempt, which was no good and which set up the deciding third overtime.