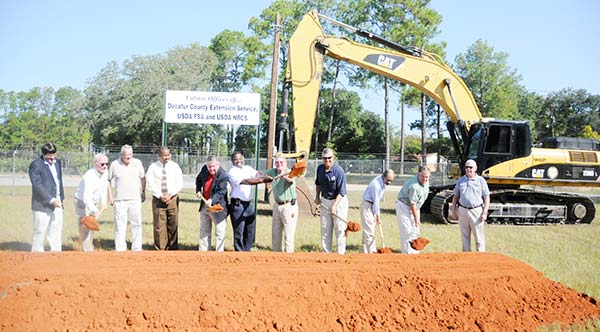 Representatives of federal, state and local governments joined together Friday to officially break ground on the future home of several agriculture-related agencies.

The new 9,724-square-foot building will be located on Coachman Street, near the Cloud Agricultural Building. It will house the Decatur County Cooperative Extension Office, the county’s 4-H program, and the U.S. Department of Agriculture’s local Farm Service Agency (FSA) and Natural Resources Conservation Service (NRCS) offices. The facility is projected to be open to the public by Feb. 28, 2012, and is expected to cost between $500,000 and $700,000.

“This building will be second-to-none and will be a tremendous asset for your community,” he said.

At an August meeting of the Decatur County Board of Commissioners, County Finance Director Carl Rowland said county prison inmates will perform most of the labor, while electricians and other specialists will finish the building.

The building will be made of metal and stone, with its facade matching the look of the Cloud Agricultural Building. In addition, there will be a covered entryway out front, which will help parents dropping off their children at the 4-H program.

County Administrator Tom Patton said the new building has been in the works for almost five years. He said some of the problems with the existing building include inadequate plumbing and hot water, exposed duct work, no kitchen facility and a leaky roof.

“Five years ago, I was asked if we could get some funds to renovate the building, and I said what we really need to do is try to get a new building,” he said. “It’s been a long process, but we’re here today, and we know that it’s going to be right here where we’re standing.”

Patton said the various agencies will maintain offices in the building, but he believed the “4-H folks” will enjoy the improved facilities most of all.

“It’s going to have a full kitchen facility, activity roms, conference rooms — I think our 4-H folks are going to be very happy with this building,” he said. “We’re going to build it ‘green.’ It’s probably going to be the most energy-efficient building in southwest Georgia, once it’s completed.”

The U.S. government will pay an annual $44,832.90 lease to maintain offices for the FSA and the NRCS office. Those lease payments will be used as collateral to pay for most of the future construction cost.

“Everybody has been 100 percent behind this project,” said Dr. David C. “Butch” Mosley, chairman of the Decatur County Board of Commissioners. “Progress is sometimes painful and slow, but we’re excited to be here today.”

For more information about the Decatur County Extension Office, including how to enroll young people in the 4-H program, visit www.caes.uga.edu\extension\decatur or call (229) 248-3033.

“We have to support our agricultural community, and I hope this is a good sign that’s what we’re doing,” Patton said.