BHS gets ‘sweet victory’ over Cairo 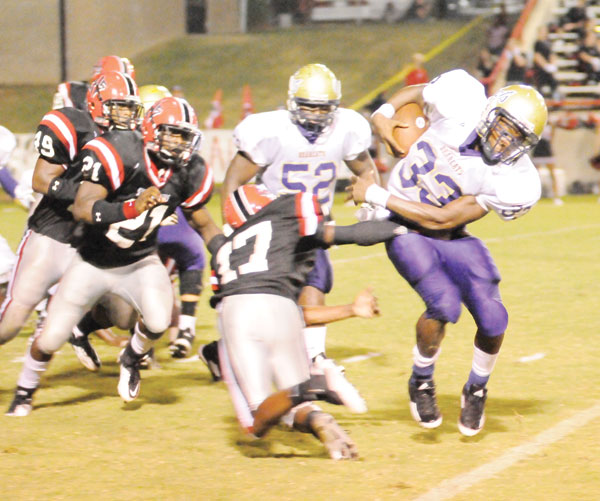 By JUSTIN SCHUVER and JOE CRINE
Managing Editor and Sports Editor
CAIRO — Junior running back Terry Lewis rushed for 101 yards and two touchdowns as the Bainbridge Bearcats topped Cairo, the No. 4-ranked team in Class AAA, by the score of 17-14 Friday night at West Thomas Stadium.
Bainbridge (2-0) led 17-7 after three quarters of play, but the Syrupmakers took advantage of a Bearcats fumble and scored on a 13-yard drive to cut that lead down to three points with 11:22 still left in the fourth quarter.
But the Bearcats’ defense held strong the rest of the way, and quarterback Quincy Fortson was able to kneel to run out the clock late.

“We made some plays when we had to make them,” Bainbridge coach Ed Pilcher said. “Our defense played really well, but we had some miscues on offense and on special teams.”

Bainbridge’s Justin Baker intercepted a pass from Cairo quarterback Steven Bench with 8:08 remaining in the first quarter, but the Bearcats’ drive stalled out. The teams remained scoreless through the first quarter.
The Syrupmakers broke onto the board first when Terrell Cason scored on a 20-yard touchdown run and Taylor Donalson added the extra point, putting Cairo (1-1) ahead 7-0 with 9:14 left in the second quarter.

Bainbridge scored on the following drive, putting together an 80-yard, 10-play drive that took 3 minutes, 56 seconds. The scoring play came when Lewis took a toss sweep to the left side for a 7-yard touchdown run. Daniel Provence added the extra point to tie the game with 5:18 remaining in the second quarter.

Provence gave Bainbridge its first lead of the game as the first half expired, nailing a 43-yard field goal.
Lewis scored again with 3:38 remaining in the third quarter, this time breaking several tackles on the way to a 13-yard touchdown run. Provence added the extra point and the Bearcats increased their lead to 17-7.

Bench, who transfered from Bainbridge to Cairo during the offseason, finished the night 7-of-18 passing for 82 yards, a touchdown and an interception. His Bainbridge counterpart, Fortson, rushed 13 times for 48 yards and did a solid job of running the offense, Pilcher said.

“Quincy made some very good reads tonight,” he said. “But I really think the difference was the play of our offensive line. They stepped up great for us.”

Fortson said he was in middle school the last time one of his teams beat a team from Cairo.

“It’s very special to get a win against these guys,” he said. “I really have to credit the offensive line. We wouldn’t have been able to win today without the blocking of those guys, and our wide receivers.”

Bainbridge will remain on the road next Friday night, as the Bearcats travel to Albany for a 7:30 p.m. kickoff with Westover.