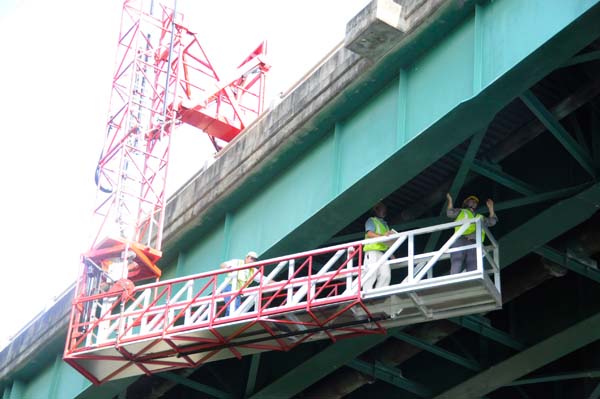 THE EXTENDED PLATFORM of the “snooper” bucket truck slides underneath the bridge to allow the inspectors to look at the pipeline.

A City of Bainbridge inspection went on as scheduled Thursday, even though it was still “up in the air.”

The infrastructure of the city’s natural gas department is undergoing a survey this month, and Thursday the inspectors were looking at the pipelines that follow along the bottom of the Calhoun Street (U.S. Highway 84) bridge. Of course, it is not an easy task to inspect gas lines that are suspended above the surface of the Flint River.

However, Bainbridge Public Services Director Steve Winburn was able to work with the Georgia Department of Transportation (DOT) to arrange for the use of a special “snooper” bucket truck. The truck contains a suspended platform that can descend and then rotate on an axis, allowing workers to get a face-to-face look at the suspended pipeline.

“They’re going to be taking photos from underneath the bridge and documenting any problems,” Winburn said. “Hopefully there won’t be any.”

Wayne Bennett, the crew chief of the project, said pipelines that are exposed to the elements often have problems that develop over time.

“We’re looking for atmospheric corrosion and rusting,” he said. “The pipelines are still sound, but over time, there are little issues that can happen.”

The federal government requires the pipeline inspection to take place at least every three years, said Kevin Maxwell, with the Gas Department.

Maxwell, Buddy Wimberly with the City Street Department, Public Works Secretary Carol Shealy and Bo Yarley of the Gas Authority of Georgia, traveled along in a boat underneath the bridge and took photographs of the inspectors. The pipeline inspectors were Bennett, Travis Lassiter with the DOT and Jamie Stillwell, a gas survey contractor.

“They were the three who said they weren’t scared of heights, that’s why they’re up there,” Shealy laughed.

Yarley explained that it is more practical and economical to have a pipeline travel along a bridge, rather than underground below the river itself.

“When that bridge was built, they likely didn’t even have the technology that would bore deep enough to get under the Flint River,” he said.

Yarley also said that the city receives natural gas from two different points, one in West Bainbridge and one in the eastern part of the city. If one of those two points were to fail, the entire city could still receive natural gas by utilizing the bridge pipeline.

It took approximately two hours to finish the project.