Martin-Wells named ‘Angler of the Year’ 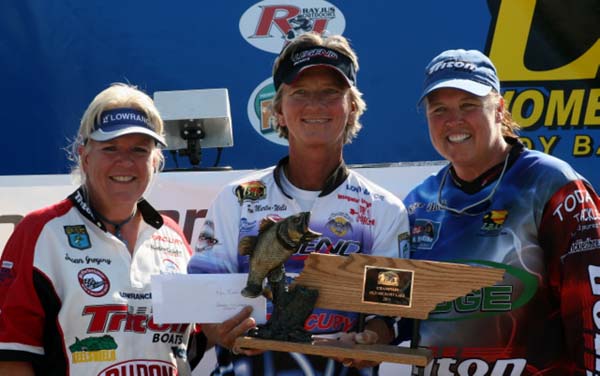 Martin-Wells only brought three bass to the scales, but they weighed a hefty 9.23 pounds and pumped her two-day total at Old Hickory to 17.63 pounds.

“I’ve always said I liked tough tournaments,” she said. “For that is when the luck factor is taken out of the equation and I really put my head down and get to it. I pre-fished from daylight until dark and told Steven (husband) this tournament would be similar to Guntersville in that you could not sit in any one place and win it. I tried to stay just like I did at Guntersville – stay open minded and be versatile.”

Martin-Wells calculated that she ran her Legend 69 miles on Old Hickory on day one alone. 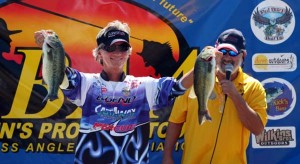 Finishing behind Martin-Wells in second was Centre, Alabama’s Lisa Johnson who had a two-day total of 15.87 pounds. Rounding out the pro division’s “Super Seven” at Old Hickory was Plano, Texas’s Cheryl Bowden in third with 15.69; Greenville, Texas’ Judith Hart with 15.47 was fourth; Lynda Gessner of Foristell, Missouri was fifth with 13.93, Murchison, Texas resident Pam Ridgle was sixth with 13.54, and Dayton, Tennessee’s Jenny Nevans was seventh with 13.11.

“This is totally awesome,” Martin-Wells. said “To win this title in the inaugural year of this organization is fantastic. They can never take this away from me — I was the first! It is neat that I now have won AOY in every woman’s circuit that I have competed in. The Good Lord has definitely shined on me!”

Bain-Moore finished second with 1,140 points and Pam Ridgle was in third with 1,095.

Lady Cats win one, have the lead in another