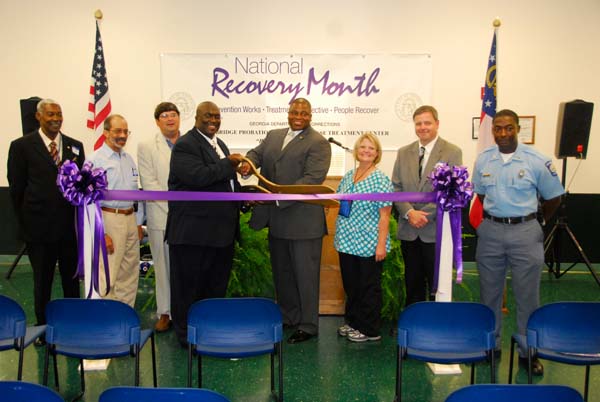 The ceremony was held Thursday morning at the Bainbridge Probation Substance Abuse Treatment Center (PSATC). Every year, the PSATC hosts about 800 men who have been sentenced by a court to serve six months there, said Moses James, the facility’s superintendent.

“Everyone knows someone who is dealing with substance abuse or mental illness or has dealt with it in the past,” James said. “National Recovery Month recognizes that those are issues in ous society and that there are services to help. It also recognizes the hard work individuals put in toward regaining their life back.”

The speaker at Thursday’s ceremony was Anita Sexton, whose primary occupation is bail bonding in Bainbridge. However, Sexton is also the director of Stepping Stones, a local halfway house for women who are recovering from substance abuse problems that sent them to prison.

Sexton, who is actively involved with the board of directors of several related non-profit organizations, recalled how she was led to create Stepping Stones. About 10 years ago, one of her close relatives was charged with a drug crime and sentenced to federal prison, where they spent seven years.

“It was then that I felt the pain and devastation that an addict’s family goes through,” Sexton said.

Sexton and members of her church started a substance abuse support group called Second Chances, which quickly grew in size. With the help of other community leaders, like Marjean Boyd, Sexton set up Stepping Stones, which has served approximately 140 women in seven years of operation.

“The ladies who come to me often come with no money, no clothes and no high school diploma,” Sexton said. “They’ve worn their families out, so they don’t have that support.”

“Long-term treatment programs like the PSATC give them an opportunity to get better so that they start living productive lives again,” Sexton said.

“Treatment helps them to see that there is life after addiction, that there are caring people in the criminal justice system and that recovery is possible,” she said.

James said that early on in his career in corrections, he learned the personal value of aiding the recovery process. 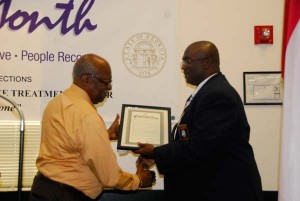 “Everybody is someone’s family member,” James said. “These are our loved ones. That’s why it’s so important that we have comprehensive services and people like our counselors and ministers in place to make recovery successful.”