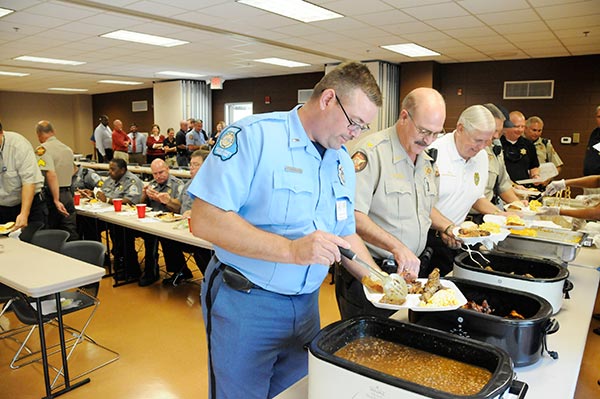 Law enforcement officers enjoyed a little lunch, and a little “food for thought” Wednesday afternoon at the classroom at the Cloud Livestock Facility.

The Office of District Attorney Joe Mulholland sponsored the “Officers’ Appreciation Lunch” for two reasons. First, to express thanks for the work done by law enforcement officers; and second, to refresh them on the importance of crime victims’ laws.

“I know that you’re overworked, underpaid and underappreciated,” Mulholland said. “Usually when you hear from people, it’s because they want to complain about something. We just wanted to let you know how much we appreciate everything you do, and we want to learn what we can do to help you.” 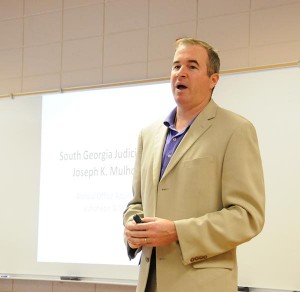 The bulk of Mulholland’s lesson dealt with the Georgia Crime Victims Bill of Rights, which was initially passed by the Georgia General Assembly in 1995. The law spells out the rights of victims of certain crimes, which includes the following:

• The right to reasonable, accurate and timely notice of the arrest, release or escape of the accused;

• The right not to be excluded from any scheduled court proceedings, except as provided by law;

• The right to be heard at any scheduled court proceedings involving the release, plea or sentencing of the accused;

• The right to restitution as provided by law;

• The right to be treated fairly and with dignity by all criminal justice agencies involved in the case.

Mulholland explained that officers could make their jobs easier by informing victims of the resources available to them, at the scene of the crime. He said the more information that officers could write down about the victims and the crime scene, the easier it would be for the case to work quickly through the judicial system.

“I know that you guys don’t like going to court,” Mulholland said, addressing the officers. “Well, if you get as much information into the report as you can, then there are fewer questions in the case and it’s less likely you’ll have to appear in court.” 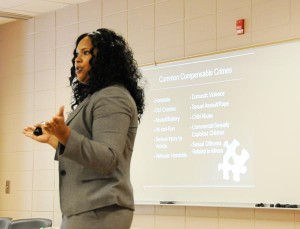 DANNIELLE LEWIS, the training and outreach coordinator for the Crime Victims Compensation Program, talks to officers about the program and how they can help.

Mulholland also provided officers with packets of brochures and other literature that include contact information for various crime victim services.

The second speaker at the lunch was Dannielle Lewis, the training and outreach coordinator for the Georgia Crime Victims Compensation Program (CVCP), through the Criminal Justice Coordinating Council. The CVCP is a victim-assistance program that helps pay funeral costs, some medical costs and even some counseling costs for victims or witnesses of certain violent crimes.

However, Lewis noted that most of the program’s assistance has a statute of limitations of three years, and it was important for officers to let victims and witnesses know about the program early in a case’s history.

She added that the program is funded entirely through DUI fines, probation fees and parole fees.

“Not a dime of taxpayer money goes into this program,” she said. “This is about the offenders paying the costs of the victims.”

We stand in support of our school leaders

While it has become commonplace to see hateful opinions about school leaders, teachers, and schools in general expressed through various... read more