Citizens give ‘shout outs’ to military 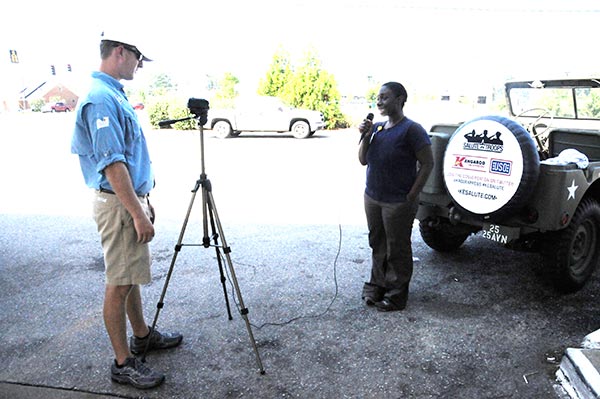 LATIFAH MOORE of Cairo films her video “shout out” Wednesday morning at the Kangaroo Express on Tallahasee Highway. Moore addressed her message to former Cairo High School classmates who are serving in the military.

A fully-refurbished 1952 Willys CJ-3 Jeep stopped by at the Kangaroo Express convenience stores on East Shotwell Street and Tallahassee Highway for several hours, as a part of the United Service Organizations’ (USO) “Salute Our Troops” Jeep tour.

The tour was designed to raise awareness and collect donations for the overseas U. S. military servicemen. Visitors at the Kangaroo Express stores not only were able to view the vintage Jeep, but they were also given free t-shirts and a chance to tape a morale-boosting “shout out” message to the military.

“The tour is 100 days long and it’s going throughout the southeastern United States,” said Drew Stipe, a member of the USO Jeep crew. “Our main objective is to capture small film clips of Americans saying how much they appreciate the military and the job they do for us each day.”

Stipe said the clips are uploaded onto a website, www.kesalute.com, and also on the “Facebook” page for Kangaroo Express stores.

“We just want the soldiers to know how much we support the work they’re doing,” he said.

Another aspect of the tour has been its fundraising. Stipe said the goal was to raise $1 million in donations, and the tour had already reached the $1.7 million mark by Wednesday, with roughly half the tour still to go.

“We’re on track to be one of the largest single donations to the U. S. military from a single fundraising campaign,” he said.

Laura Harris of Bainbridge was one of several citizens who filmed a shout-out message at the Kangaroo on Tallahassee Highway.

“I just wanted to give them thanks for everything that they do, and I believe that what they are doing is right,” she said.

“They’re all in the military,” she said. “I just told them that we love them and we’re waiting on them all to come back home when the job’s done.”

Stipe said the Jeep was initially used by a general in Hawaii, and had been fully refurbished.

“We’ve had a lot of veterans and people stop just to look at it,” he said.

The fundraising campaign has raised funds for the USO, Wounded Warrior Project, and state-based military support organizations since Memorial Day. The tour will continue through Labor Day. 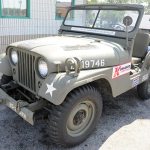 THIS REFURBISHED 1952 Willys CJ-3 Jeep was on display at local Kangaroo Express stores Wednesday, and visitors were also invited to tape a video “shout out” to troops serving overseas. 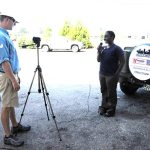 LATIFAH MOORE of Cairo films her video “shout out” Wednesday morning at the Kangaroo Express on Tallahasee Highway. Moore addressed her message to former Cairo High School classmates who are serving in the military. 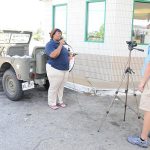 LAURA HARRIS of Bainbridge films a “shout out” to the U. S. troops as USO Jeep crew member Tim McGinn works the camera at the Kangaroo Express on Tallahassee Highway on Wednesday morning.