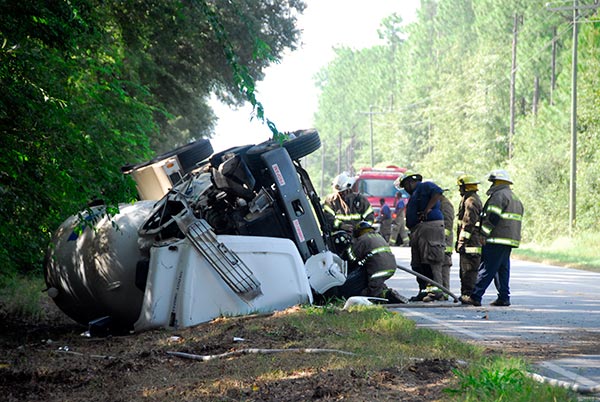 Firefighters spray water on the underside of a propane truck that ran off the road and caught on fire off Georgia 302 South on Thursday morning. | Brennan Leathers

A man was injured Thursday morning when the propane truck he was driving ran off Georgia State Route 302 South, overturned and caught on fire, according to the Georgia State Patrol.

The accident happened shortly before 10:30 a.m. Thursday on Georgia 302 South, just south of the highway’s intersection with Faceville-Attapulgus Road near the Georgia-Florida border. The injured driver was identified by the State Patrol as Clarence Jones, but his age and hometown were not immediately available.

Decatur County Sheriff’s deputies said Jones was driving a Ferrellgas truck carrying a full load of propane gas southbound on Georgia 302. From his initial observation, Sgt. John VanLandingham of the State Patrol’s Colquitt, Ga., post, said it appeared Jones drove off the western shoulder of the road, attempted to re-enter the roadway and over-corrected his steering. The truck spun around counter-clockwise and overturned onto its side, with the cab of the truck pointing north.

The rear of the truck and its undercarriage caught on fire. People working in a tomato field off the highway helped free the driver from the truck and sprayed a fire extinguisher on the fire, Decatur County Fire and Rescue Chief Charlie McCann said. The truck was leaking a small amount of propane after crashing, so firefighters and other emergency responders had to be especially cautious due to the risk of the gas igniting,  McCann said.

The driver, Jones, was reportedly bleeding from his head and complaining of chest pain, according to deputies. An Emergency Medical Service ambulance transported Jones to Memorial Hospital in Bainbridge, McCann said.

Deputies had to detour traffic around both sides of the accident for some time after the crash. A large-size wrecker from Royce’s in Cairo, Ga., was called to the scene to upright the truck and carry it away.