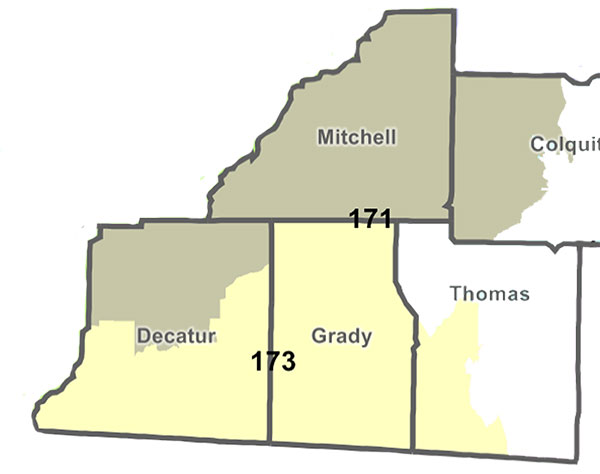 Decatur County voters will likely get a new Georgia House representative in 2013, due to redistricting of political lines associated with the 2010 Census.

New maps for Georgia House and Senate districts, as well as Georgia’s representation in the U.S. House of Representatives, were approved by the Georgia General Assembly on Tuesday morning. They will now go to the desk of Gov. Nathan Deal for his signature. If Deal approves the plan, the maps would be submitted to the U.S. Department of Justice for its final review.

Georgia is one of nine states that must get any change to voting or election law approved by the federal government, as required by the Voting Rights Act of 1965.

Under the tentative plan, Decatur County would be split up into two House districts.

The new House map would group Bainbridge, Brinson and northern Decatur County — excluding Climax — in District 171 with Camilla, Pelham and part of Colquitt County. That district is currently represented by Jay Powell, an attorney from Camilla.

Attapulgus, Climax and southern Decatur County would be placed in District 173 with Cairo, Whigham and part of Thomas County, including Thomasville. That district is currently represented by Darlene Taylor.

Decatur County’s current House representative in District 172 is Gene Maddox, who lives in Grady County. Under the proposed changes, Maddox would have to run against Taylor in order to maintain his seat. District 172 would be shifted east to encompass parts of Colquitt and Tift counties.

Maddox, 73, first took office in 2005 and was just re-elected in 2010. On Tuesday, he announced to The Post-Searchlight that he will not run for re-election against Taylor.

“I’ve been in office going on eight years and the campaigning, the traveling — it can be hard on me,” Maddox said. “Physically, I’m doing good, but I don’t plan to run for re-election unless something really drastic were to happen.” 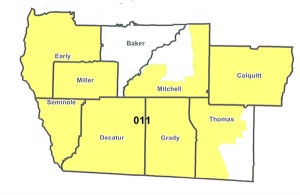 Under the new State Senate map, Decatur County will still be in Senate District 11, currently represented by John Bulloch, a farmer from northern Thomas County.

The district is still comprised of Early, Miller, Seminole, Decatur, Grady and Colquitt counties, with part of Thomasville. In fact, the only apparent change in Senate District 11 appears to be how the line splitting up Thomas County between District 11 and District 8 — which includes Lowndes County and Valdosta —   will grow to include five adjacent counties.

Bulloch was most recently re-elected in 2010 and will be up for re-election in 2012.

Under the new maps, the 2nd Congressional District of Georgia would add most of Bibb County, including the large city of Macon, Ga.

However, the district would lose all of Thomas and Brooks counties, as well as the part of Lowndes County it currently includes. Starting in 2013, those areas would be included in the 8th Congressional District, which includes Valdosta, Tifton, Warner Robins and a corridor of central Georgia.

The Eighth Congressional District is currently represented by Austin Scott of Ashburn, Ga.