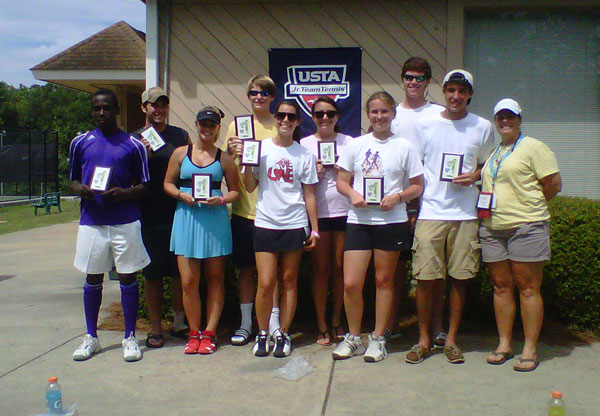 A local group of 18-and-under (18U) tennis players recently placed second in the State Junior Team Tennis tournament which was played in Macon, Ga., July 29 through July 31.

Xavier Bell, Kelly Brooks, Meredith Conder, Hillary Flournoy, Billy Grimsley, Stone Inlow, Nolan Lovering, Mitchell Massingill, Kristen Monson and Anne Reynolds were teammates in Macon, with their team captained by Linda Monson. Each match consisted of girls and boys singles, girls and boys doubles and a mixed doubles match. The score of the match was based on how many games each team won.

The Bainbridge players competed in the 18U Intermediate Gold division and defeated teams from Atlanta, Savannah, Buford, and northeast Georgia. During the first four matches, the total number of games won was tallied for all teams, with the team with the most points advancing to the State Finals.

When the points were tallied, it turned out that there was a tie, but because the Bainbridge team had defeated the northeast Georgia team by two points, Bainbridge advanced to the state finals. The opposing team in the finals was from Columbus. Bainbridge fought hard in the match, but lost by 11 points.

“Everybody played hard over the course of five matches, and I am so proud of how everybody played, and represented Bainbridge,” Coach Linda Monson said. “We have some really great kids in the tennis program, and it was very exciting to be in the finals.”

With the second-place finish, the Bainbridge team was offered a wildcard placement in the Southern Team Tennis tournament to be held in Mobile, Ala. Unfortunately, scheduling conflicts with several players made them have to decline the opportunity.

All of the kids on the team also play for the Bainbridge High School tennis team.