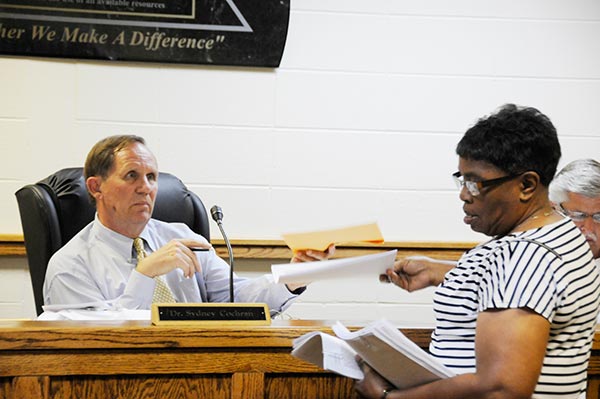 The Decatur County Board of Education defended both Superintendent Dr. Fred Rayfield and Dr. Linda Lumpkin, assistant superintendent for Human Resources, in the wake of recent allegations that the system had engaged in discriminatory hiring practices.

At the July 21 regular meeting, Decatur County citizens Doris Cosby and Sandra Gordon each addressed the board to levy accusations of unfair hiring practices relative to minority applicants. Both provided written statements, asking for records of recent hiring activities. Gordon also called for the resignations of both Rayfield and Lumpkin, who is black.

At Thursday’s planning meeting, Board Chairman Sydney Cochran presented board members with written statements that had been prepared in response to both Cosby’s and Gordon’s requests.

“Would anyone on the board have any objection if I stated, on behalf of the board, that our hiring issues are in compliance,” Cochran asked, with no board members voicing objection. All board members were present Thursday, except for Clarissa Kendrick.

Cochran later asked if the board would have a problem with him stating publically that the board would not call for Rayfield’s or Lumpkin’s resignations. Again, there was no objection.

Cochran noted the lack of objection and verified that the prepared written statements and statistics would serve as the board’s response to Cosby and Gordon.

The written response to Cosby’s statement addressed the total numbers of teaching and administrative positions in the Decatur County Schools system, breaking those positions down by race. The total breakdown, system-wide, was reported as 225 black employees, 442 white employees, one Asian employee and two Hispanic employees. Among only certified teachers, the breakdown was: 53 black teachers, 296 white teachers and one Asian teacher.

The board’s response to Gordon’s statement addressed her concern that her niece, Shamoria Williams, who had been a Kirbo Foundation scholar, was not hired to fill a teaching position even though she had allegedly already been promised a job.

The board has been in a “hiring freeze” for several years due to budget restraints, and can only hire to refill vacated positions.

Citizens address the board again

During the later regular meeting, Cosby and Gordon each appeared before the board once again during the public comment portion of the meeting.

“We cannot talk about specific individuals in this meeting,” he said.

Cosby then provided board members a new letter addressing her concerns (see the full letter on The Post-Searchlight’s website). She also provided photocopies of Brown’s college degrees.

Gordon also again addressed the board concerning her niece. According to the PSC website, Williams has a valid teaching certificate in Early Childhood Education.

“You have plenty of people with a degree in Early Childhood Education that are teaching special education students,” she said.

Cochran again re-emphasized that the Kirbo Foundation scholarship contract does not promise immediate employment after graduation.

“Those agreements allow them to interview for jobs, but they do not guarantee a job,” he said. 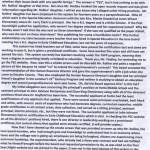