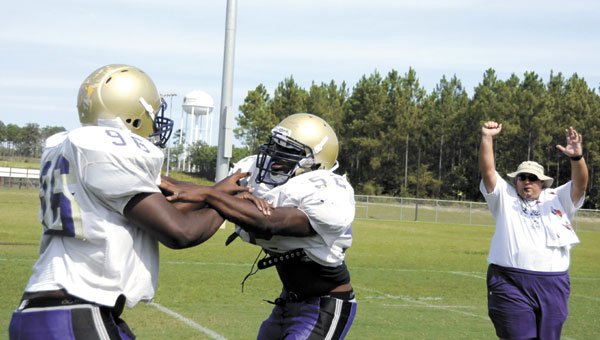 BAINBRIDGE ASSISTANT COACH Brian McCorkle expresses his excitement after two Bearcats grapple during a blocking drill at practice Monday. Bainbridge will host Americus-Sumter County this Friday in a preseason scrimmage, at 7 p.m.|Justin Schuver

Returning senior starting quarterback Malik Thomas completed 44 percent of his passes for 769 yards a year ago despite being slowed by an ankle injury. Also sesing action at quarterback for the Panthers will be Jonathan Thomas and Johntavion Lawson, a pair of sophomores, and senior Brice Benton, who transferred from Newnan High School.

The Panthers will use an eight man front on defense. In the seondary they will use a zone coverage.