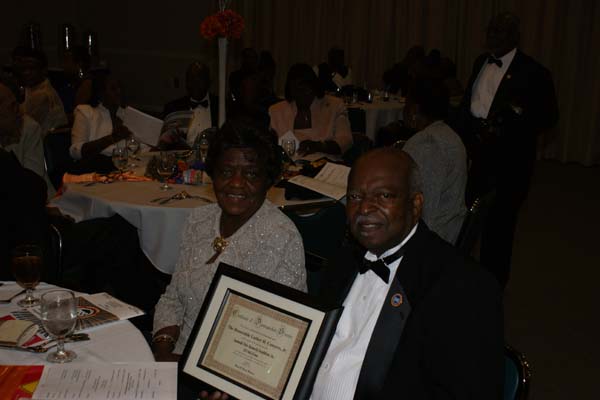 LUTHER CONYERS and his wife, Gwendolyn, proudly display the award certifying his induction into the Savannah State University Hall of Fame.

He was inducted into the university’s Hall of Fame Class of 2011 in the category of Civic Service, a subject he knows plenty about.

Mr. Conyers has served as a representative for District A to Bainbridge City Council for 33 years and is the longest-term employee of the Decatur County Schools. He has devoted 62 years, with the exception of two years in the military, to public schools. He is also an active member on an extensive list of civic boards and organizations.

As honored as Conyers was to become a member of the Hall of Fame, he received another meaningful honor when he was privileged to announce the first scholarships of $1,000 each, given by the newly formed Kirbo-Conyers Endowed Scholarship Fund, to 10 students.

Conyers said he had served for a number of years on the Bainbridge College Foundation board, and knew of the generosity and influence of  Bruce Kirbo, who had helped endow scholarships to BC. Conyers began to wonder if something could be done to help students attend his alma mater. When he contacted Kirbo, he was told the Kirbo Foundation would pledge $100,000, if Conyers could match that amount within one year.

Conyers not only met the goal, but exceeded it, by raising $150,635 in the allotted time. The Kirbo-Conyers Endowed Scholarship became reality in fall 2009, and has grown since then. As scholarships are granted from the interest raised on the principal, this year became the first when funds were available for distribution.

The scholarships are given on the basis of “needs,” and it states in the memorandum of understanding that students from Bainbridge and Decatur County will be given preference.

The Conyers family has a long history of association with Savannah State. Luther and his three brothers all graduated from that institution.

While a student there, Conyers met his future wife Gwendolyn, a fellow student, and the two were married in 1948, six months after their college graduation. They have both pursued careers in education.

Conyers first taught in the Institutional on-farm Training program, designed for World War II veterans. He served in that capacity for two and a half years, before he was inducted into the Army. He completed basic training at Ft. Jackson, S.C., and took advance training in artillery at Ft. Bliss, Texas, before being shipped to Korea, where he served 16 months and 27 days — long enough to receive three bronze stars as a member of the transportation crew. His teaching skills were put to good use there, teaching basic education classes.

After returning home to Bainbridge in 1942, he began substitute teaching and enrolled at Fort Valley State College to major in education. He was employed at Randolph County High School for six months, and then in the fall of 1954, he began teaching at Bainbridge Elementary School. He received his master’s in education in 1961 from Florida A&M, and in 1965 he was transferred to Hutto High School as a teacher of social studies. In 1970, he became a teacher of eighth and ninth graders at Hutto Junior High School.

The Conyers have two daughters, both of whom have followed in their parents’ footsteps. Audrey Rhodes, a teacher in Memphis, Tenn., and Dr. Luthenya Wright, an administrator at Peach Tree Ridge High School, both graduated from Savannah State. Granddaughter Leslie Wright is also a graduate of SSU, but her brother Eric “broke ranks” and went to Florida A&M.

Luther Conyers still serves as a part-time attendance support personnel in the Decatur County Schools, where he works to inspire the belief in each student that what they do today will affect what they will do tomorrow.