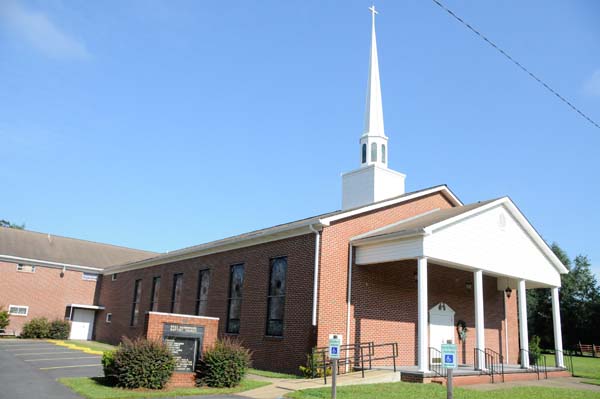 WEST BAINBRIDGE BAPTIST CHURCH offers the food bank as one of its community ministries.

With many in the community suffering from a depressed economy, at least one church is doing its part to try and meet the needs of Decatur County.

West Bainbridge Baptist Church, located at 801 N. Griffin St., has been the site of a community food bank for almost two years. Jay Hadley, the director of the food bank, said the bank has already helped feed more than 3,500 people and has given out more than 65,000 pounds of food since it opened.

“We’ve had a real success with running this, and we just want to let people know that it’s here,” said Hadley, adding that Pastor Danny VunCannon played a critical role in helping get the food bank operating.

Hadley is an agent with Second Harvest of South Georgia, in Thomasville. As an agent, Hadley is allowed to operate a food bank at a church location, and Second Harvest provides administrative assistance and also some food from its distribution center. However, most of West Bainbridge’s food supply comes solely from individual and business donations.

“If it wasn’t for the help of citizens and local businesses, we wouldn’t be able to have this food bank,” Hadley said.

“Some of these businesses see me regularly and they always give generously to the food bank,” he said.

Those who use the food bank are required to fill out applications and must meet certain income requirements, in order to prevent abuse. Hadley said the applicants come from a wide spectrum, including the elderly, the disabled and also single parents.

“We have a lot of singles who have two or three kids they’re trying to raise, because either their husband’s left or their wife’s left,” Hadley said. “We’ve got a lot of elderly who are trying to decide between buying food or buying gas or medicine.”

On the door of the food bank’s storage room is the Bible verse, Luke 14:12-14, which says in part: “When thou makest a feast, call the poor, the maimed, the lame, the blind. And thou shalt be blessed; for they cannot recompense thee; for thou shalt be recompensed at the resurrection of the just.”

“That verse is the philosophy behind the food bank,” Hadley said.

Hadley added that his personal connection with the food bank has been spiritually and emotionally fulfilling.

“A lot of people give me hugs,” he said. “I’ve had several families that I’ve taken food to, and the children say things like, ‘Yay Momma, we get to eat supper tonight.’ That just tears me up inside.

“There are a lot of kids, even in our own community, that go without lunch and supper these days, and we have no idea about it.” 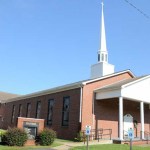 WEST BAINBRIDGE BAPTIST CHURCH offers the food bank as one of its community ministries. 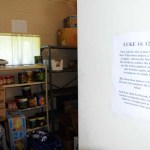 A BIBLE VERSE is posted on the door leading into the food bank’s storage room. 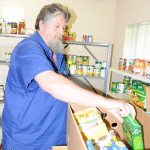 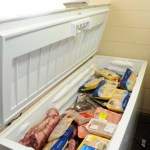 THE FOOD BANK has a small freezer full of meat and other perishable items, as well as dried goods.