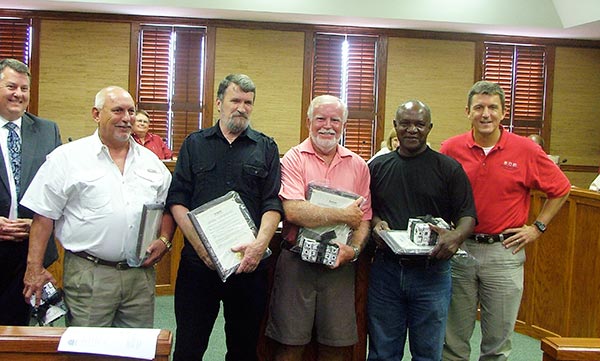 The honoring of five city retirees with a total of 178 years of service highlighted Tuesday’s Bainbridge City Council meeting at City Hall.

Mayor Edward Reynolds expressed his appreciation to all the honorees for being such loyal and dedicated city employees through the years.

In other action, the council voted unanimously to approve Mrs. Jammie Allen’s request to annex her home at 108 River Oaks Drive into the city so she can receive water service.

City Manager Hobby explained that the county tax digest valued property in the city at a little over $1.1 million more than last year, but that since the state allows the millage rate to stay revenue-neutral, it was able to stay basically the same.

The city also approved an license to sell beer for off-premises consumption for Michael Denton, who lives in Milton, Ga., for the Raceway at 1418 Tallahassee Highway. The vote to approve was 5-1, with Councilwoman Roslyn Palmer voting no.