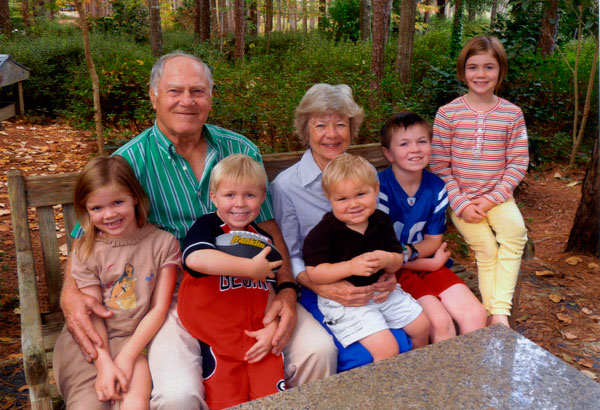 LAMBERT FAMILY: Grandparents, Wayne and Pee Wee, enjoy the company of Philip Lambert, second from right, and his four siblings.

Retired Brig. Gen. Wayne Lambert and his wife, Pee Wee, are naturally proud of all of their eight grandchildren, but they take special pride and recognition of the recent accomplishments of 11-year-old Philip Lambert, son of Shane and Teresa (Tess) Lambert of Fredericksburg, Md.

Young Lambert, who is the oldest of five children, excels in many areas, but his latest achievement has been featured in a news article that appeared June 29 in Fredericksburg’s newspaper, The Free Lance-Star. He was the only fifth-grader in a field of more than 8,000 students nationwide to earn a perfect score on the three Gold Division WordMasters Challenge analogy tests.

The analogies tests included such words as maelstrom, maverick and trepidation.

WordMasters Challenge Director Nancy McGrath is quoted in the article as saying students sometimes earn perfect scores on one test, but to do it all three times is pretty remarkable.

The article, as well as his grandmother, point out that he is not a one-dimensional person. Or as Pee Wee puts it, “That is just the half of it.”

In addition to being an avid reader, which helps him develop his vocabulary, she describes him as an accomplished pianist who has appeared with symphonies in the Washington, D.C., area. He has played solo pieces at the Manassas (VA.) Music Festival and given recitals at Mary Washington University.

This summer he was enrolled in a college course at Mary Washington University—titled “How to Solve it”—described as a two-week camp covering problem-solving strategies.

Further proof of this young man’s well-rounded personality is his love of sports. He plays football, tennis, basketball and baseball. In fact, he was the quarterback of a flag football team.

His goal is to become a sports announcer or else a pilot.

Both of his parents are West Point graduates who stress education, learning and a love for the outdoors to all five of their children, according to their grandmother, who describes all of the children as talented in their own and different ways.

The senior Lamberts are looking forward to a visit from all five of the children this summer.