Perhaps BPS’ most important law enforcement victory was its role in breaking up a large, multi-state illegal drug ring in March, culminating a four-year investigation.

Officers who took part in the multi-agency investigation that stretched from Atlanta, Ga., to North Florida seized 25 kilograms of cocaine and more than $1 million in cash over a 15-month period.

Not only did taking 23 drug suppliers and dealers off the streets make the affected communities safer, but the agencies who took part in the investigation benefited as well, Green told the council. With its share of the proceeds seized legally from the suspects in the drug case, BPS bought more than $100,000 equipment that will enhance officers’ ability to protect themselves and citizens, Green said.

Green and other officers shared statistics concerning BPS’ work in the past year, from June 2010 to June 2011.

The department responded to 232 total fire calls during that period, with an average response time of two minutes and 20 seconds. Officers also conducted a number of fire safety inspections, including at personal care homes in the city, and provided citizens training on fire safety and hazardous chemical awareness, BPS Assistant Fire Chief Doyle Welch said.

BPS Training Officer Ryan Wimberly said the number of line-of-duty deaths of police officers nationwide has risen at an alarming rate in recent years. Given that potential for danger, Wimberly has been focusing more on having officers participate in scenario-based training which he said “adds more realism and acclimates them to working in dangerous situations.”

Public Safety is in a transition period as far as its leadership goes, with the impending retirement of Director Larry Funderburke in December and the early retirement of several other officers, including Fire Chief Dennis Mock and Assistant Fire Chief James Brock, this past June.

Firefighter Jeff Kelly, who had been working shifts at the West Bainbridge Fire Station, has been promoted to fill the vacant assistant chief position. Kelly is also the chief of the Climax Volunteer Fire Department.

A Council-appointed committee is currently reviewing applications for the position of BPS Director. 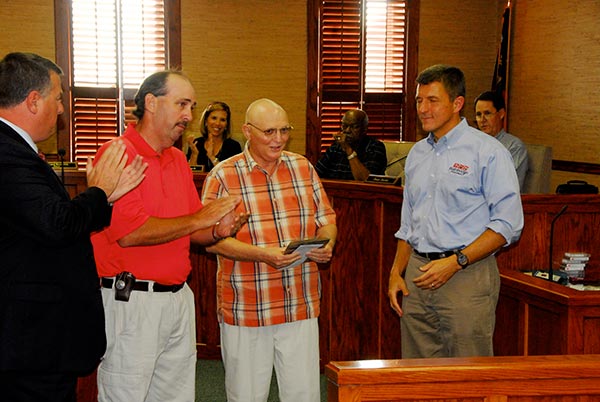 EMPLOYEE OF THE QUARTER for the City of Bainbridge is Wayne Bennett, an employee of the city’s Natural Gas Department, who was recognized during Tuesday night’s City Council meeting. From the left, are City Manager Chris Hobby, Utilities Director Bo Ladner, Bennett and Mayor Edward Reynolds.

The following  arrests and citations, a list of those occurring between July 19-22, have been reported by the Decatur County... read more