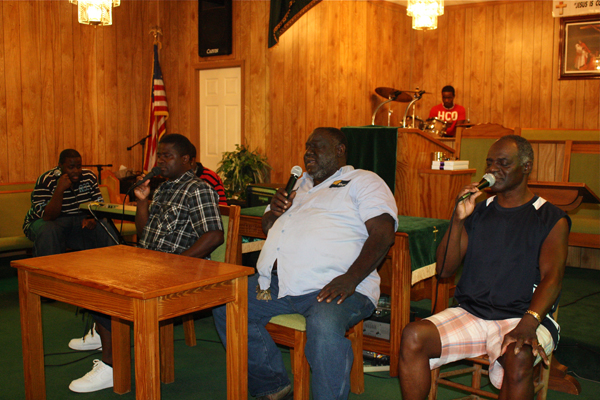 THE SPIRITUAL WONDERS have been singing and making music together for almost 38 years. Recently, one of their songs was picked to be used on a movie’s soundtrack. In the front, from the left, are original members Arthur Lee Perkins Jr., Derrick Akins and Paul Rogers. In the far left is Terrance Perkins, playing the drums is Derrick Samuel, and on the keyboard is Ledante Glynn.

Divine intervention is where something out of this world becomes possible for what seems the impossible.

The Spiritual Wonders, a singing group from Bainbridge knows exactly what that means. The group has been producing and playing music for 37 years. Finally the product of their hard work and dedication to the gospel has reaped what they sowed.

The manager for The Spiritual Wonders today is Arthur Lee Perkins Jr., the son of the man who had carried this group to what it is today.

They’ve traveled all over to get the word of God out, explained Perkins.

“We are a family,” he said. From New York to the smallest venue, The Spiritual Wonders have poured their souls into the music but there was one place that used to be untouched, and that was the movies.

Halfway across the United States in California is where that story starts. A documentary film was being produced of a woman’s life spent mostly in jail for the murder of her husband, a false statement that landed Debbie Peagler in jail for over two decades of her life. The film is called “Crime After Crime” and a song that The Spiritual Wonders produced and was written by the late Arthur Lee Perkins Sr. is in the movie being sung by Debbie Peagler. After 37 years, the vision that Arthur Lee Perkins Sr. had was complete.

“His vision was to do a song that would be heard all away around the world and he accomplished that. It topped off his life, his legacy. He was real spiritual and loved the group. Sometimes he put the group before his family and we didn’t understand why but now we see it was for a reason,” said Perkins.

The Spiritual Wonders have produced two full-length albums, the first holding the song “Stranger From Galilee,” which can be heard in “Crime After Crime.”

“We did all the work on the albums. We wrote the songs, produced the music, copyrighted the music and sent it to various radio stations across the United States,” he said.

The real mystery in the situation is how that song came to be heard by Peagler.

Perkins Jr. has a theory that he believes in.

“We probably may never know how it exactly came to be, but I know it was a spiritual connection in some way because I know man couldn’t do that,” he said.

The group currently has eight members, a whole football team, according to Perkins Jr.

True to his word of this being a family matter, most of the group is blood related. Two of the members have been in the group for 36 years.

A unified voice within the group is that the song finally is getting to the ears of many is shocking but not surprising.

“This is my livelihood. We knew in our hearts we had something. We just didn’t know how great it would be. Only God knows that. We worked together as a tight group and try to give our best. We count this as a blessing,” said Paul Rogers, one of the original members.

Since the group is BMI-affiliated, they gain royalties every time their song is played in the movie, money that will go toward recording their third album.

The movie “Crime After Crime” started showing July 1 in selected theaters around the country. There will be a showing in Atlanta July 29 that the members plan on attending. The movie can be seen on television Nov. 1 through Oprah Winfrey’s OWN broadcast network.

The Spiritual Wonders will celebrate their 38th year together in December and will continue making music for the soul purpose of the Lord.

If you ever want to catch the vocal groups singing go to Mount Olive church on Sundays. That is where their whole family sings in the choir.

County owes us an explanation