Touring Canada with the band 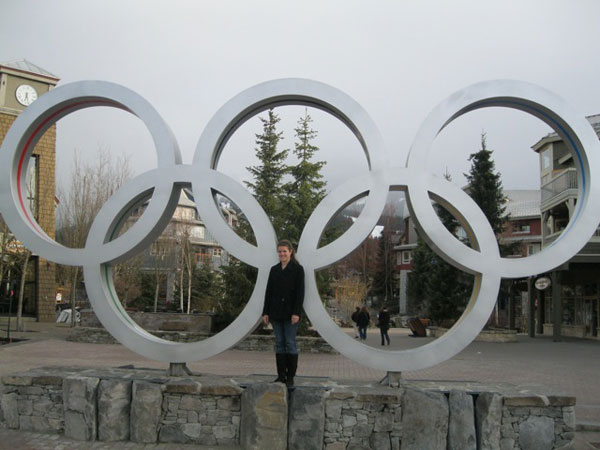 Me in front of the Olympic rings from the Vancouver 2010 Winter Olympic Games. This was taken in Whistler Village, where many of the Olympians stayed during the Games. 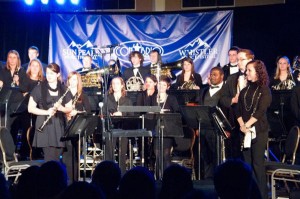 The Troy University Symphony Band at our featured performance for the Whistler Music Festival. (I am on the second row, slightly off center to the right.) 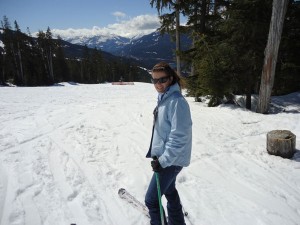 I had the opportunity in my free time to go skiing on the same slopes that were used for the 2010 Winter Olympic Games! 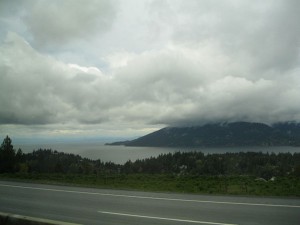 A view of the Sea to Sky Highway and the surrounding scenery en route to Whistler Village. 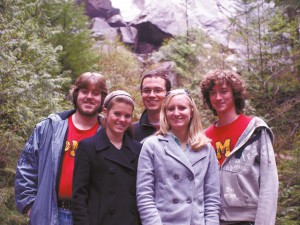 The Symphony Band French Horn section in front of Shannon Falls. To my left is Sean Miller, also from Bainbridge and a 2009 BHS alumnus. 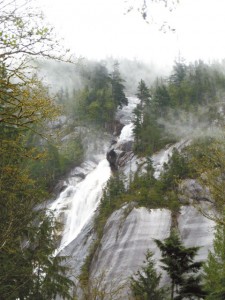 In April, I had the privilege of traveling with the Troy University Symphony Band to perform a musical tour in Vancouver and Whistler Village in British Columbia, Canada.

The symphony band, comprised of 55 members, was the largest group from the university to travel internationally to date. As representatives of Troy University, we experienced life in a foreign country, explored the beauty of Canada’s natural wonders, and interacted with Canadian natives who have influenced the music world.

Our trip began with a 5 a.m. departure from Troy University that ended with an extensive stay in the Atlanta airport. Tornado activity in the Dallas-Fort Worth area caused flight delays that led to flight cancellations that ultimately left 55 college students and their directors in the Atlanta terminal for the night.

Thirty-five hours after departing from Troy, 40 of us finally arrived in Vancouver. Due to flight changes and overbooked flights, the other 15 arrived 12 hours later. Unfortunately, because of our travel delays, we were forced to cancel a concert at a local high school on the first night.

In spite of the delays, the school requested that we conduct a sound check rehearsal that the students could attend. We arrived two hours later than our scheduled concert performance, but we were greeted by applause from 100 energetic high school students. After our long and stressful journey, their enthusiastic welcome was gratefully received.

Although we were on a strict time schedule of required performances and clinics, we were also given the opportunity to see several of the well-known tourist sites that Canada has to offer. We toured the city of Vancouver on our own and immersed ourselves in the Canadian culture. This included learning how to pay for meals with Canadian money, and also dodging the exuberant Vancouver Canucks hockey team’s fans (the team had won a home game the night of our stay).

While in the Vancouver area, we traveled across the Lion’s Gate Bridge to perform a concert at West Vancouver Technical College. The Lion’s Gate Bridge is a suspension bridge that connects the city of Vancouver to West Vancouver and is one of the largest tourist attractions in Canada. I learned that its name refers to “The Lions,” a pair of mountain peaks north of Vancouver. After our performance at West Vancouver Tech, the director of bands from the school presented the Symphony Band with a statue of an “Inukshuk,” an Inuit tradition that is used to welcome travelers. The figure of the “Inukshuk” was the Vancouver 2010 Olympics logo.

While traveling from Vancouver to Whistler Village, we rode along the Sea to Sky Highway and stopped at several tourist sites. One of my favorites was the famous Shannon Falls, the third highest waterfall in British Columbia. The view from the bottom of the waterfall was breathtaking!

I even had the chance to climb to the top of the bluff to snap a few pictures before returning to the bus to continue our trip.

We arrived in Whistler Village for the Whistler Music Festival where the Troy Symphony Band was to be the highlighted guest performance.

During the festival, middle and high school bands from the area performed and were evaluated and critiqued by a panel of judges. During these performances, I had the opportunity to shadow the judges, all of whom were internationally renowned conductors. This allowed me to listen to their commentary of each band’s performance and absorb knowledge that will benefit me as a future music educator. The judges were engaging and wanted to know my opinion about each band’s performance. I was astounded at how much the judges wanted to talk to me and the other students from Troy. They seemed just as eager to talk to us as we were to learn from them.

On the final night in Canada, we performed our featured concert at the Whistler Music Festival for an audience of thousands. In fact, we had to perform two back-to-back concerts in order to accommodate everyone!

During the concert, we performed with several guest soloists from Canada and Troy. We also had the honor of playing the world premiere of a piece titled “Battling Boggarts,” and a piece that was specifically written for the Troy University Symphony band titled, “Free Running” by Bob Buckley, a Canadian composer. His full album, “Continuum,” was recorded by the Troy Symphony Band earlier this spring.

The concert also included contemporary band pieces, several jazz pieces and chamber ensemble pieces. This was by far the largest concert performance of my musical career. With almost 150 hours of rehearsal time logged throughout the semester, the concert performance was an exciting achievement!

My trip to Canada was by far one of the highlights of my life. It was my first time traveling internationally, and the environment was so much different than that of Bainbridge, Ga., the place I’ve called home for 19 years.

I feel very privileged to have had the opportunity to go on the trip; it’s not everyday a university sends 55 college students abroad!

It was so exciting to share something that I love, the gift of music, with people from another country. My time in Canada was a once-in-a-lifetime opportunity that I will never forget.

Editor’s Note: Kylie McGlincy is the daughter of Joe and Donna McGlincy of Bainbridge. She is a 2010 alumnus of Bainbridge High School and is studying music education at Troy University. Kylie was a member of the BHS girls’ tennis team that finished second in Class AAAA in 2010 and was among the Top 5 students in her graduating class. Just prior to her graduation, she also received Decatur County Schools’ prestigious John Philip Sousa Award, given in recognition of outstanding achievement in instrumental music. A French horn player, Kylie is also a member of Troy University’s Sound of the South Marching Band.