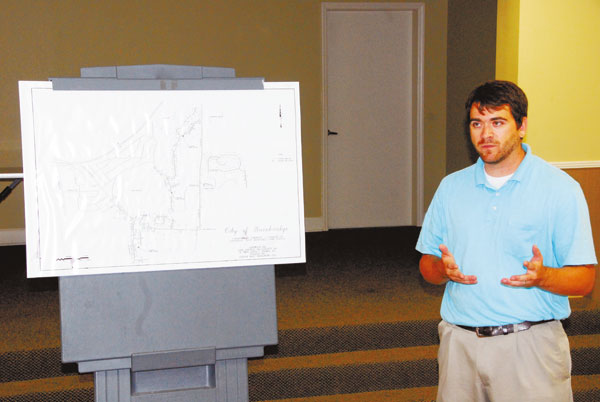 EXPLAINING MORE at a Monday informational meeting about the Lake Douglas East sewer project that should begin around September is Dustin Dowdy, City of Bainbridge Planner and director of special projects.

It’s taken a little bit longer than expected, but the City of Bainbridge is ready to start work on the third phase of its sewer master plan, the so-called “Lake Douglas East” project.

With an approximate cost of about $4 million, the project will make sewer service available for a fee to about 352 lots, or more than 237 homes, which are currently using septic tanks, according to city officials. Work will start later this summer on College Road and will include Lake Douglas Road, the eastern section of Twin Lakes Drive, Ashton Way, Legette Drive and numerous side streets. The expected time to project completion is 18 months.

While only a few people showed up at a Monday informational meeting, city officials expect there will be a number of Lake Douglas area residents who will be concerned about how the project work will affect them.

“We are begging people to be patient with us,” said Dustin Dowdy, city planner and director of special projects. “It is going to be an inconvenience for awhile.”

While the plan is for most of the sewer work to be done under the center of the existing roads contract workers with Popco of Sylvester, Ga., will occasionally have to dig up part of the right-of-way along the streets, Dowdy said.

The good news is that once the sewer work is done, streets will be re-paved and driveways will be fixed, Dowdy said. In the meantime, city officials are committed to making every reasonable accommodation to keep daily life as normal as possible. That could include temporary mailboxes for some homes, but traffic flow will be open to residents, postal workers, school buses, garbage trucks and emergency services, he said.

Once the project work in their area is complete, residents can expect to begin having a sewer base fee added onto their monthly utility bill. However, to make use of the new sewer lines, residents will have to pay a $345 tap fee, as well as a one-time $1,325 assessment fee, for a total of $1,670.

The assessment, which was calculated based on expected usage of the service and is not related to lot dimensions, covers the city’s cost in bringing a four-inch line from the sewer main to the right-of-way in front of each home. To tap into that line, a fairly simple task, homeowners will have to hire their own state-certified plumber, Dowdy said.

The City of Bainbridge will soon send out letters to every affected property owner containing more information about the Lake Douglas East sewer project.