Students putting on the ritz 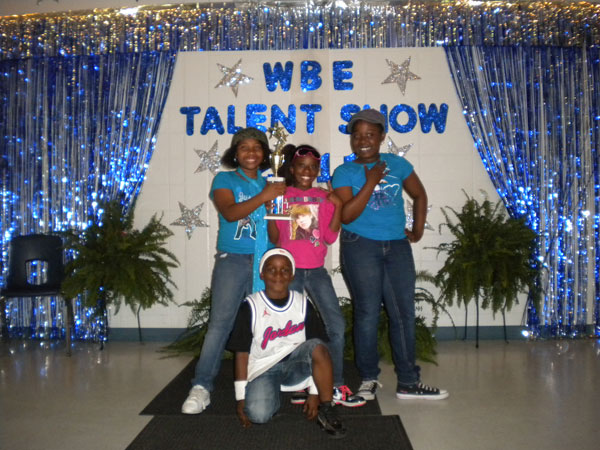 PUTTING ON THE RITZ were the winners of the West Bainbridge Elementary School talent show. They are, fourth-graders Jatavia Burke, Alyssia Ross and Nakhalia Frazier, and in front, a second-grader Aaron Mosely.

West Bainbridge Elementary School kids were “putting on the ritz” in, what most people said, was “the best talent show ever!”

This talent show had it all—singing, dancing, tumbling, cheerleading and even hula-hoop tricks!

Beginning in April, the students, faculty and staff were given an invitation to audition. After three weeks of being wowed by all of the talent that WBE had to offer, the final selections were made.

The kids worked hard on routines and “fine-tuning” their talent. Then came the big moment. There were feet tapping and hands clapping and everyone was singing along to some of today’s most popular music. The judges had a hard job. They had to give points on appearance, audience response and overall performance.

After the scores were tallied, third place went to the Deep South Cheer Team, a group of kindergarten competition cheerleaders, and second place was awarded to Lyneshia Cooper, a third-grade student.