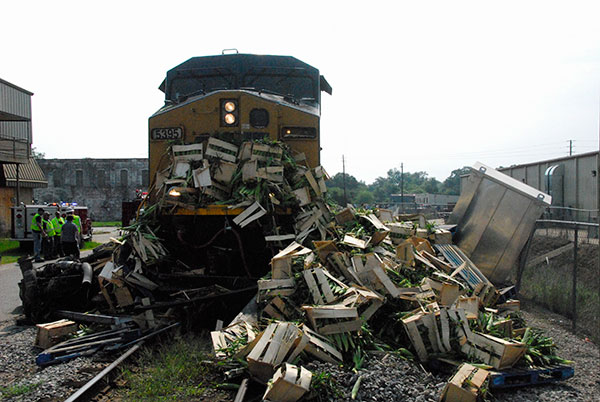 A train struck a corn-hauling truck that was attempting to cross the railroad tracks at Albany Road in Bainbridge Tuesday morning.

The accident happened at about 10 a.m. at the railroad crossing that is behind Stone’s and next to Port One Liquors. The corn truck had came from the Calhoun Street bridge, turned onto Albany Road and was unable to stop at the railroad crossing, according to City of Bainbridge employee Wayne Josey, who had been traveling behind the corn truck in a city maintenance truck.

The driver of the corn truck, a middle-aged Hispanic male identified as Francisco G. Garcia of Belle Glade, Fla., attempted to pull into a ditch behind Stone’s to avoid the crash, Josey said. However, the train struck the trailer full of boxed corn and pushed the truck approximately 150 yards down the track.

Garcia had visible injuries to his leg and shoulder which did not appear to be life-threatening. He was alert and concious while being treated by EMS and reportedly climbed out the truck’s cab and sat down on the ground. The cab, which laid destroyed on its side, hit a railroad switch and separated from the truck’s trailer about 5-10 yards short of where the train stopped, at the intersection of Independent Street and Back Street.

BPS Assistant Fire Chief Doyle Welch, commander of the Bainbridge Hazardous Materials Response team, said nothing could be moved from the accident until CSX railroad investigators arrived from Dothan, Ala. The cleanup was expected to take several hours, so in the meantime traffic is being detoured around the affected crossings.

Motorists can still cross the railroad tracks at Sims Street and also at Webster Street.

The corn trailer dumped out a large amount of corn along the tracks—two large piles of corn were left at the impact site and in front of the train engine. As the trailer was drug along the tracks, it damaged a chain link fence behind Stone’s warehouse and knocked over an electrical box that controls the railroad crossing arms.

Bainbridge Public Safety Firefighter Eddie Williams put out a small fire that started when some of the corn and truck parts lying next to the train became hot.

Various truck parts, large and small, laid along the north side of the railroad tracks. The truck’s saddlebag gas tanks had burst open and scattered diesel along the tracks. The hood of the truck and its front wheels were torn off; the cab itself was completely detached from the trailer. Inside the cab, lying on its side, all the windows had popped out and the steering wheel was bent like a pretzel.