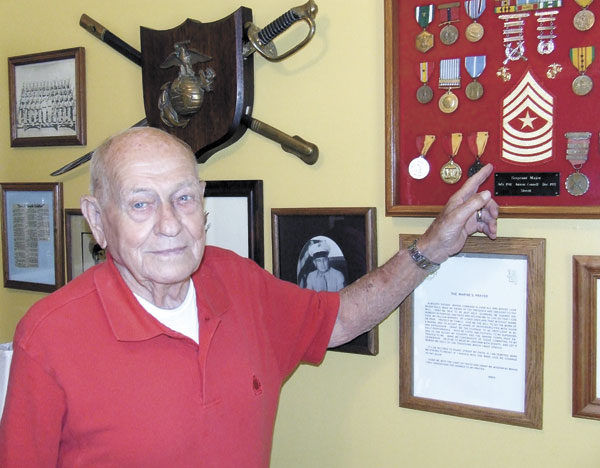 SARGE AT HOME in his room of Marine memories. 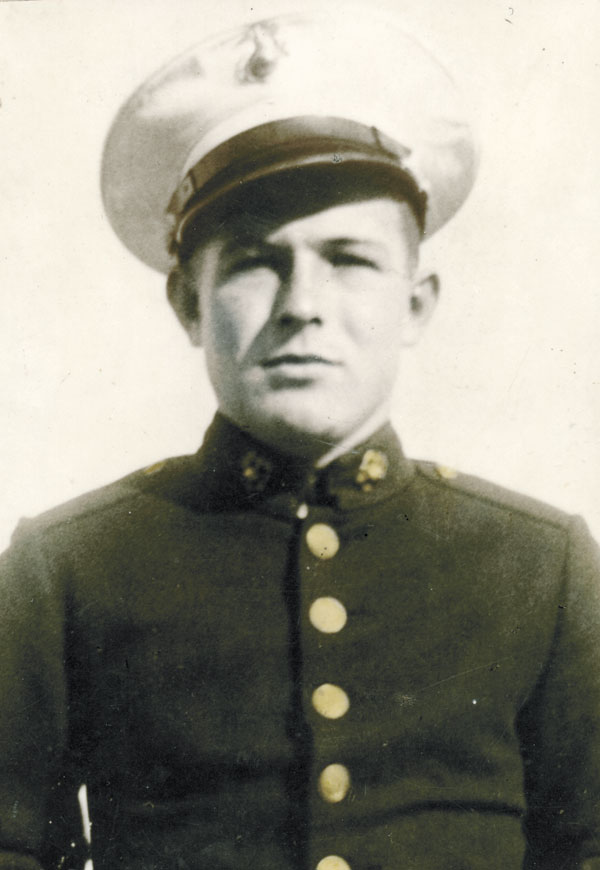 AUSTON CONNELL at age 19, a new enlistee to the U.S. Marines. 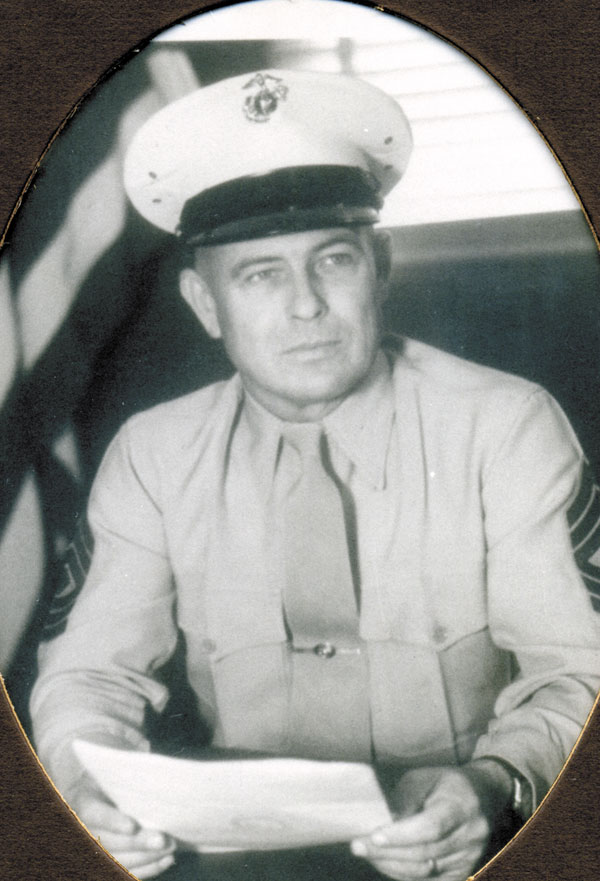 1ST SGT. CONNELL, before he made the grade to sergeant major.

Retired U.S. Marine Corps Sgt. Major Auston Connell, known to all who know and love him as simply “Sarge,” is indeed a very special person.

On Sunday, June 26, Sarge celebrated his 89th birthday and was recognized at the patriotic music concert held at Memorial Coliseum, not only for achieving a landmark age, but even more for his 30 years of service to his country.

Connell was born in Nashville, Ga., but grew up in Webster, Fla. He enlisted in the Marine Corps in July 1941 at the age of 19— before Pearl Harbor. He said he, like many other young men of his time, were unaware of the impending war when he enlisted.

He was stationed in Charleston, S.C., on that fateful Sunday in December 1941, preparing to go trap shooting with a buddy. When they went to check out the shotguns they were told the Japanese had bombed Pearl Harbor.

“We all wondered where Pearl Harbor was. If they had said Hawaii, we’d have known, but we found out soon enough what it was all about,” he recalls.

In a matter of three months he found himself in American Samoa in the South Pacific.

He spent the next 34 months in the Pacific Theater of operations. At first he said there were a lot of air raids from the Japanese, who had the upper hand in the beginning of the war, but as the Allied Forces began to make progress he found himself in hand-to-hand combat.

He fought at Guadacanal in the Solomon Islands, a campaign that began in August 1942. This was the first major offensive against the Empire of Japan. The Allies captured it and renamed the airstrip Henderson Field. Several attempts were made by the Japanese to retake the strategic airfield, but the decisive battle was fought and the island secured in November 1942.

As a member of the 1st Marine Division, Connell took part in the battle of Peleliu. The coral island, which was supposed to have been secured in a matter of four days, actually took over two months to win. The battle raged from September to November 1944, and had the highest casualty rate of any battle in the Pacific Theater. It has been defined as “The bitterest battle of the war for the Marines.”

Following the end of World War II Connell came back to the states, then was sent to Korea for 34 months.

Thinking he had had enough, he submitted his request for retirement orders, but then there was the Vietnam War. True to the Marine motto, “Semper Fi,” he said he felt as if he would have been quitting when there was work to be done, so he withdrew his request and spent the next 14 months in Vietnam, stationed with a medical battalion.

In between wars, Sarge was state side, stationed mostly at Camp Lejeune, N.C., Camp Pendleton, Calif., and even in Tallahassee, where he was assigned to a reserve unit as an inspector/instructor. It was while in Tallahassee that he met his wife, Dorothy Logue, originally from Decatur County.

The couple has been married 40 years and after his retirement from the Marines they went to live in Live Oak, Fla., until making the decision to come to Bainbridge 11 years ago to be nearer Dorothy’s son, Roger Edmunds, and his family. Sarge also has a son, Larry Connell, who lives in Webster, Fla. He served three years in the U.S. Navy.

The Connells are active members of First Baptist Church where they sing in the senior choir. They have definitely become settled Bainbridge residents and enjoy their home and friends greatly.

Asked his opinion about the troop withdrawals from Afghanistan, Connell said, “I think we should either get in or get out—one or the other.” In other words, fish or cut bait. He thinks there will always be wars and rumors of wars and that you have to take what comes and make the best of it—adjust to differences and changes in life.

“You have to go with the changes in life. It’s the same with war,” he adds.

Sarge continues to be in good health. When a phone call was made to the Connell home to request an interview appointment he was out on the lawnmower in 97-degree weather, mowing his grass.

He is, indeed, one of those special people from “the greatest generation,” as defined by Tom Brokaw. If he leaves us with any thoughts for this Independence Day weekend, it is that “Freedom is not Free,” and, of course, always remember “Semper Fi.”

A federal appeals court has upheld a summary judgment for the City of Bainbridge in a lawsuit filed by a... read more