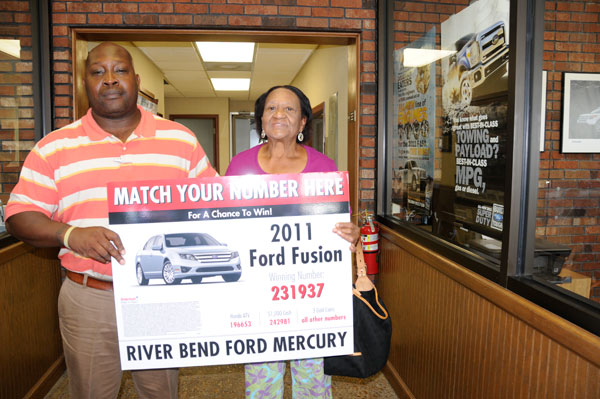 Lauriene Daniels, a 78-year-old resident of Jakin, Ga., beat 1-in-29,000 odds to win an Honda ATV from Bainbridge’s Riverbend Ford’s match-the-number contest. Daniels said she received a flyer with a number on it, and it matched the pre-determined number on the poster, said Mickey Atkinson, general sales manager with Riverbend Ford. “It truly was her lucky day,” Atkinson said. Mrs. Daniels said this was the first time she won something like this. She said her husband, Arthur, may ride the ATV around their property. They have a son, Derrick Daniels, who is in the Army stationed in Hinesville, Ga. Mrs. Daniels, on the right, is standing with Herman T. Garland, left, a sales consultant with Riverbend Ford.