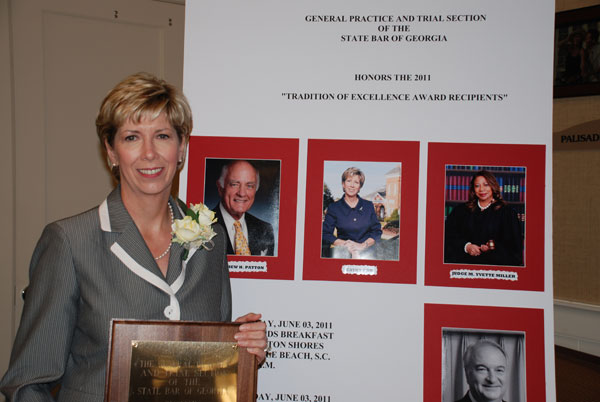 YOUNG HARRIS COLLEGE PRESIDENT and former Georgia Secretary of State Cathy Cox is a recipient of the 2011 Tradition of Excellence Award for General Practice, an accolade presented by the General Practice and Trial Section of the State Bar of Georgia. 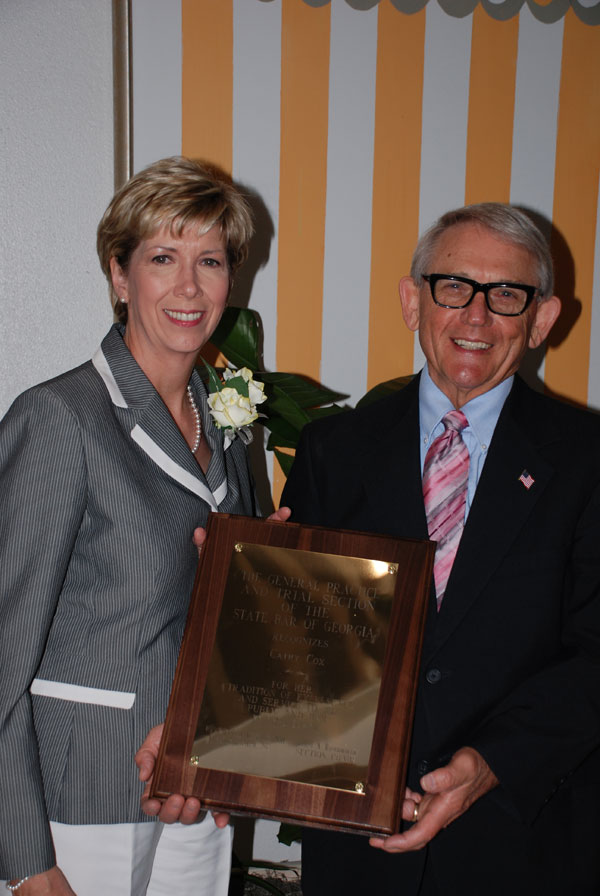 BAINBRIDGE NATIVE CATHY COX, the recipient of the Tradition of Excellence Award for General Practice, stand with South Georgia Circuit Chief Judge A. Wallace Cato, who introduced Cox at the awards ceremony.

Cox was recognized for this accomplishment during a special ceremony at the organization’s annual meeting held in Myrtle Beach, S.C., on June 3.

Cox, who currently serves as president of Young Harris College in Young Harris, practiced law with the firms Hansell & Post in Atlanta and Lambert, Floyd & Conger in Bainbridge. During that time, she used her legal skills as a member of the Georgia General Assembly and the House Judiciary Committee. She subsequently applied her legal skills in her service as Georgia’s Secretary of State, as a faculty member at the University of Georgia’s School of Law and as college president at Young Harris College.

Cox was introduced at the General Practice and Trial Section’s award breakfast by South Georgia Circuit Chief Judge A. Wallace Cato, who described her as “a credit to the profession” and “one of the most tenacious lawyers” he had ever observed.

“Cathy Cox is the personification of what a good lawyer should emulate. She simply exudes those qualities and character traits that recipients of the Tradition of Excellence Award should have. She is truly a mover and a shaker, a real trail blazer,” Judge Cato said. “Cathy is never satisfied with the status quo; she is always looking for an opportunity to make a difference. I can think of no one more deserving of the award.”

Cox was nominated for the award by a number of attorneys, including her former law partner, State Court Judge George Floyd of Bainbridge, as well as Bainbridge native William Custer IV, who was sworn into the Bar with Cox by Judge Cato in 1986 and now practices law with the Atlanta firm Bryan Cave Powell Goldstein LLP.

The General Practice Section of the State Bar of Georgia has been presenting Tradition of Excellence Awards for the past 25 years. Recipients must be Georgia-resident members of the State Bar who have 20 years of outstanding achievement as a trial lawyer, general practitioner or judge; be 50 years old or older; have made a significant contribution to State Bar or Institute of Continuing Legal Education activities; have a record of community service; and have a personal commitment to excellence.

Cox is the daughter of Mary Barber Cox of Bainbridge and the late Mayor and State Rep. Walter Cox. She is married to attorney Mark Dehler and lives in Young Harris on the campus of Young Harris College.