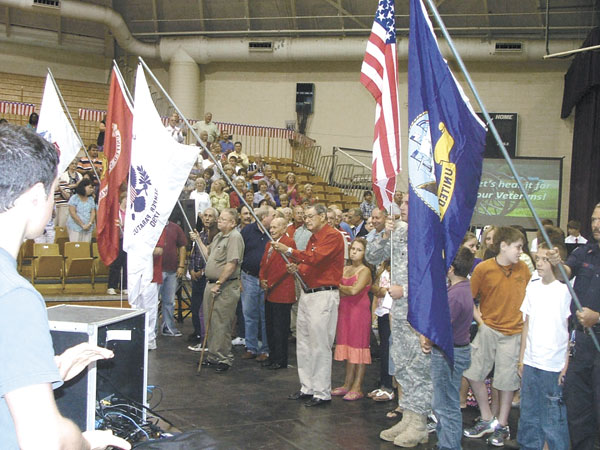 VETERANS OF BRANCHES of the military service stand behind their service flag during Sunday’s Patriotic Program at the Decatur County Memorial Coliseum. 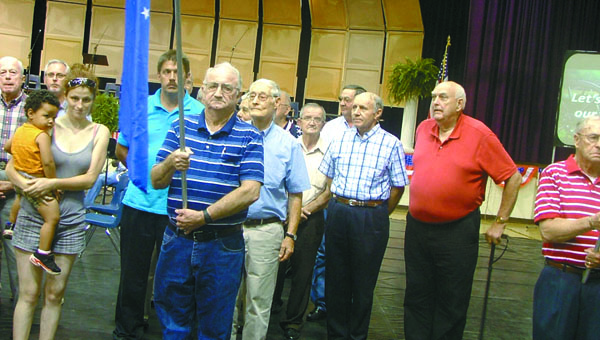 UNITED STATES AIR FORCE veterans gather behind their service flag at Sunday’s Patriotic Program. They were joined by local children and veterans of all other branches of service behind their flags. Second from front is Ed White, and center back is retired Col. Gary Breedlove.

The program began with the band playing “America the Beautiful” and the audience singing along.

Following the presentation of the colors by the Bainbridge High School Air Force Junior ROTC color guard, retired Air Force colonel and long time ROTC program director Gary Breedlove led the audience in the Pledge of Allegiance to the flag.

It was followed by the band playing “The Star-Spangled Banner.”

A highlight of the program came when veterans of each branch of military service marched in behind their service flag. Pictures of each branch then appeared on a video screen accompanied by their song.

Each branch lined up behind their flag accompanied by local children. The band accompanied the audience who sang the “Battle Hymn of the Republic.”

The prayer of thanksgiving was given by First Baptist Church pastor the Rev. Paul Medley.