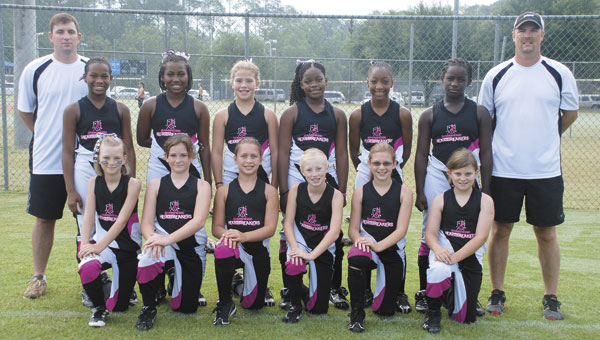 They won six straight games Friday, Saturday and Monday in the double-elimination tournament in Moultrie after losing the first game 10-9 to the host Moultrie A team.

The Bainbridge All-Stars will now advance to the state GRPA tournament July 6-9 in Vidalia. They are District 3 champions for a second consecutive year.

Last year, they won the District 7- and 8-year-old championship.

Jeff Summerlin, who coaches the All-Stars with Jason Andrews, said he couldn’t be prouder of all the players on the team.

“Our players came through in a lot of clutch situations,” coach Summerlin said.

In the opener against the Moultrie A team, the Bainbridge All-Stars had three run rallies in the second, third and fifth innings. The second-inning runs were scored by Bree Powell, Mallie Kate Andrews and McKynleigh Harrell, who all singled.

Crossing the plate in the third were Shelbie Summerlin, who reached on an error, a singling Desirae Beachem and a singling Carly Godwin.

In game two, the Bainbridge All-Stars bounced back to shut out the Cairo All-Stars 13-0. They put the game away with a seven-run, third-inning rally. Powell, Desirae Beachem, Anna Beth Bibby, Makayla Hamilton and McKynleigh Harrell all had RBI singles in the inning.

The Bainbridge All-Stars continued their offensive explosion in game three, rolling to a 17-5 victory over the Thomasville All-Stars.

Their big-scoring inning was the seventh when they rallied for seven runs. The runs were scored by Beachem, Bibby, Hamilton, Andrews, Mycha Harris, Addison Enfinger and Tyra Blocker, who all banged out singles.

In game four the Bainbridge All-Stars avenged their opening loss with a 5-3 victory over the Moultrie A team. They pushed across the winning run and an insurance run in the fifth inning. The runs were scored by Harris, who reached on an error, and Blocker, who got aboard on a fielder’s choice.

The road to the championship continued with an 11-1 victory over the Colquitt County Recreation Department Heartbreakers.

They went ahead to stay with three runs in the first inning. Key blows in the inning were RBI singles by Hamilton and Harrell.

The Bainbridge All-Stars clinched the championship with two clutch victories over the Lee County All-Stars, downing them 15-13 and 11-9.

The big scoring inning in the opening game with Lee County was the second, when they rallied for eight runs. Big blow was a three-run home run by Thyra Jackson.

They scored six runs in the sixth inning of the championship game. Harrell, Harris and Enfinger all singled and scored in the inning.