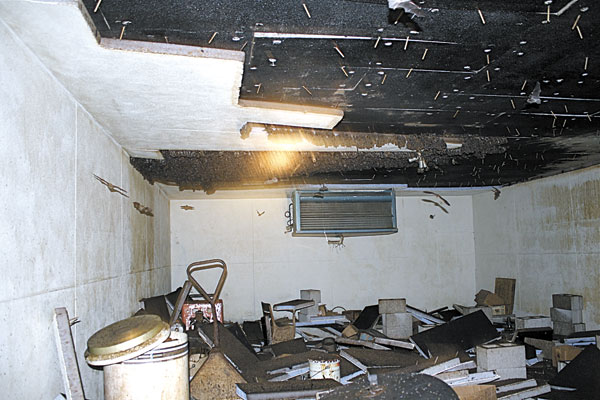 INVADED BY BATS, an old cooler owned by Ferris and June Sandlin has a problem with bats, but not mosquitoes. 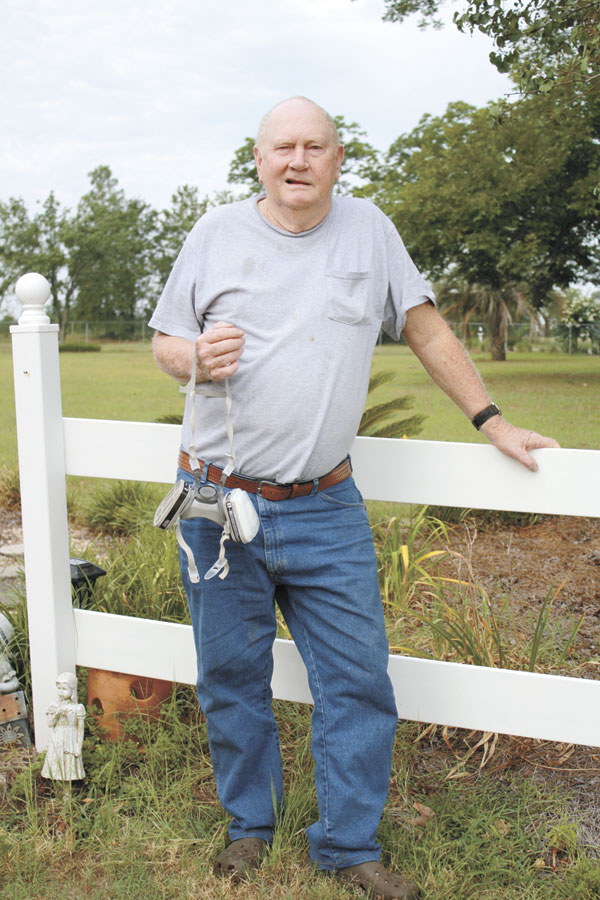 FERRIS SANDLIN shows the mask he must wear when he gets near the entrance of the storage building where the bats have taken up residence.

The Sandlins have a new harvest in this year and they aren’t the usual crop.

Ferris Sandlin, a retired farmer of 40 years, has some unwanted guests in his old egg processing plant at his home near Colquitt. Thousands of bats have taken a liking to the old cooler in the plant, used at one time to keep eggs after they had been cleaned and processed. For the Sandlins, the odor and the number of bats have become unbearable.

The bats were first spotted three months ago and since then have multiplied.

June Sandlin discovered the bats first by their smell.

“I went into the building to take paint cans and I smelled first a terrible odor, then I heard a fluttering sound. I eased up to the door and all I could see were bats flying around and stuck to the ceiling,” she said.

Since the electricity has been cut off for years it made it very difficult to determine just how big the problem was going to be.

“We didn’t think much about it in the beginning, but now the odor is worse and growing every day,” said Mr. Sandlin.

A word that the Sandlins have become familiar with over the past three months is “guano,” the bat droppings that layer the floor, creating the odor that is making the building impossible to walk in. In fact, in order to step into the building the Sandlins have to wear a protective mask as the fumes can affect your breathing.

“The whole ceiling is covered by bats. I don’t believe there is a vacant spot for another one. Our grandson says there are so many that the babies are falling on the floor,” said June Sandlin.

Desperate to try and drive the bats out, Ferris Sandlin tried using a barbecue grill to smoke them out but the bats eventually flew back into the cooler. Concerned with the growing number of bats, the Sandlins made contact with the Georgia Department of Natural Resources and spoke with Jim Ozier of the wildlife preservation division to see about removal of the bats.

“Mr. Ozier told me that the bats won’t hurt you and they won’t bother you if you leave them alone. I informed him I didn’t want them here and he agreed to come here and see about how to remove them,” said Mr. Sandlin. Since the bats have not been determined as endangered species, the Sandlins have been told for now to be patient and wait for his arrival.

“The only positive thing of the bats abnormal number is the lack of mosquitoes present this summer,” explained June Sandlin.

“They go out at night and catch insects. Early around daylight they fly over the pond we have and eat mosquitoes. One bat can eat a hundred mosquitoes,” said Mrs. Sandlin.

“There hasn’t been one mosquito,” explained Mrs. Sandlin, but she’d rather have the mosquitoes over the bats.

Jim Ozier should be at the Sandlins home in two weeks to investigate the congregation of bats and help them get rid of their smelly issue. Until then, the Sandlins keep clear of their egg processing plant and enjoy the mosquito-free zone at their home.