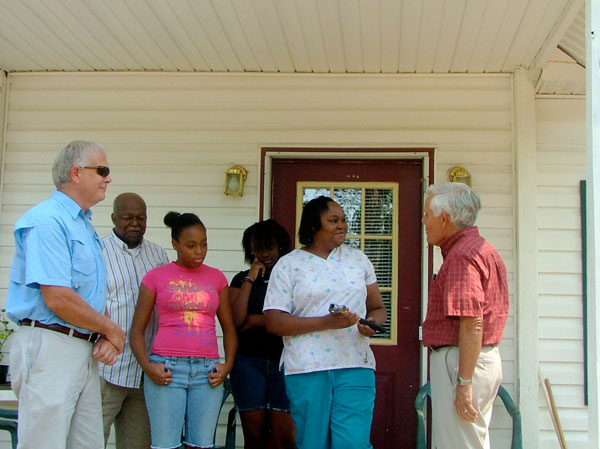 BAINBRIDGE-DECATUR COUNTY Habitat For Humanity President Bill Bowers, right, talks with Paula Jones after presenting her with a Bible and a hammer along with the keys to her new home at 1210 Broughton St. Also taking part in the presentation, from the left, are Habitat board member Lesley Kinchen, Bainbridge City Councilman and Habitat board member Luther Conyers, and Ms. Jones’ daughters, Shontraye Jones and Shamyra Miller.

Bowers, who made some brief comments during Sunday’s ceremony, also presented the family with a Bible and a hammer.

“Habitat For Humanity is a Christian organization and we are guided by Christian principles,” Bowers told the family. “I know that you will all work hard to keep the house looking good.”

The house, which was donated by former Habitat For Humanity president and board member Laura Bridges, contains approximately 1,700 square feet and has four bedrooms and three bathrooms.