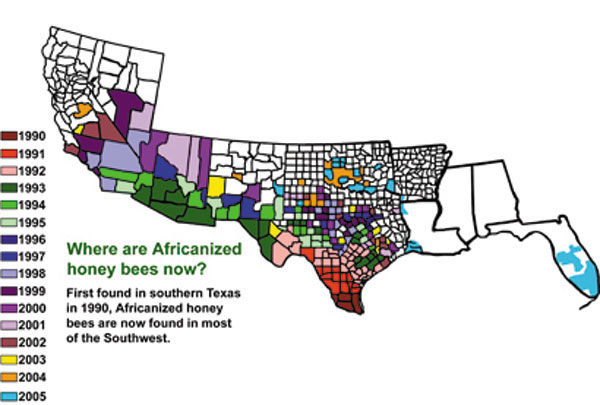 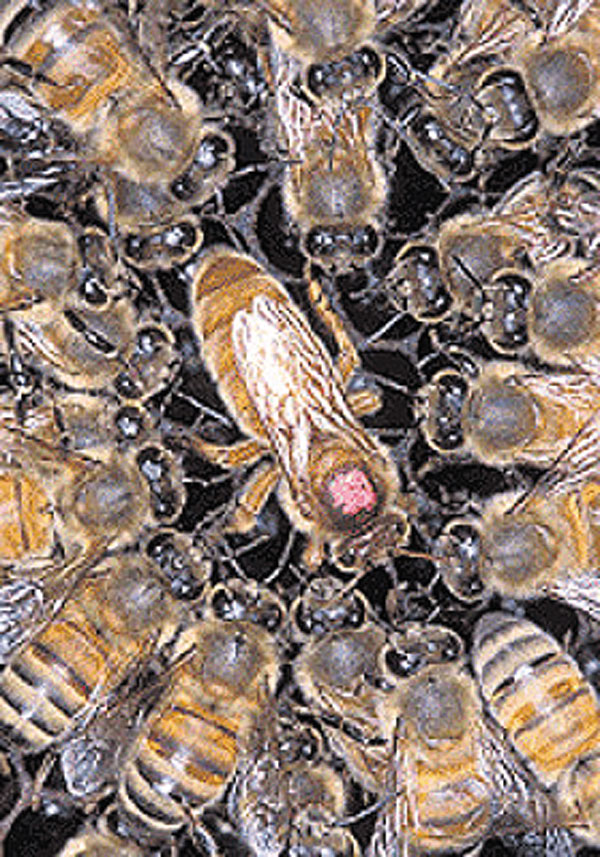 AFRICANIZED BEES, sometimes referred to as killer bees because of their swarming rate intense defensiveness to protest their nests, were confirmed in Decatur County. The Africanized bees usually have a variety of nest locations, including in-ground or in the open, which could increase likelihood of human contact.

Recently the Georgia Department of Agriculture confirmed that a swarm of Africanized honeybees was identified in Bainbridge.

Certainly this raises a red flag of concern by the public over the discovery of these aggressive and potentially deadly bees.

To provide timely information on this subject, Keith Delaplane, University of Georgia extension bee entomologist, recently published some guidelines on dealing with the Africanized honeybees. This information should be beneficial if bees are discovered on your property.

In 1956, researchers imported honey bees from Africa into Brazil in an effort to improve beekeeping in the New World tropics. These African bees were well suited to conditions in Brazil, and they began colonizing South America, hybridizing with European honey bees (hence the name “Africanized” honey bees) and displacing European bees. Compared to European bees, Africanized honey bees are much more defensive.

Large numbers of them sometimes sting people and livestock with little provocation. They are also occasionally known to take over European bee colonies by entering them and killing the resident queen. Because of these noxious behaviors, many beekeepers abandoned beekeeping, and the media widely publicized these so-called “killer bees.”

The bees spread northward at a rate of about 200 to 300 miles per year, and today every country in Latin America except Chile has established populations of Africanized honey bees.

In October 1990, the first natural colony of Africanized honey bees was found in the United States near Hidalgo, Texas. In subsequent years, the bees moved in a westerly manner, eventually occupying much of the American Southwest and the southern counties of Nevada and California. By the summer of 2005, Africanized bees were confirmed east of the Mississippi with established populations in Florida.

In spite of the alarm surrounding Africanization, these bees have not caused widespread or permanent chaos. Dramatic stinging incidents do occur, but the quality of life for most people is unaffected. Typically, the commercial beekeeping industries of Africanized areas suffer temporary decline and then eventually recover.

European honey bees are adapted to winter survival, largely because of their ability to collect large honey supplies.

Africanized bees, on the other hand, do not overwinter well and respond to food shortages by migrating. European bees make large, permanent colonies whereas Africanized bees make small to large colonies that reproduce (swarm) often.

As Africanized bees expand into temperate areas, their tropical adaptations are less advantageous. Cold weather seems to limit both their defensiveness and overwintering capacity. Africanized bees are more defensive in warm tropical regions and less so in cooler zones.

In South America, the bees do not overwinter south of 34 degrees south latitude, which corresponds roughly to Atlanta, Ga. (Please note, however, that Africanized bees are found north of this latitude in the American West.)

In Argentina, Africanized bees dominate in the northern semitropical regions but European bees dominate in the southern temperate areas; the area in between (ca. 32-34 degrees latitude) is a hybrid zone where bees have varying degrees of African or European traits. A similar pattern may occur in the United States, with African traits dominating in southern regions.

When Africanized bees reach your area, don’t panic. Just as you should look out for fire ants and poisonous snakes, stay alert for wild bee colonies when you are outdoors.

• Never knowingly approach an occupied bee nest. During daylight hours bees can be seen flying to and from their entrance.

• Do not disturb a swarm of bees. Call a professional bee removal service, the fire department, or your county Extension agent for help removing it.

• Never climb a tree, kick a log or stump, or move trash until you first check if bees are flying in and out.

• Keep an escape route in mind. Never crawl into an enclosed place from which you cannot quickly exit.

• Operators of open-cab tractors are especially at risk from hidden in-ground colonies. Keeping a veil on hand is a good safety precaution.

If you are attacked

Run away or get indoors as fast as possible if you are attacked.

Never stand in one spot and swat because this only aggravates bees further and increases the number of stings you may receive.

Be aware that bees may follow you for hundreds of yards. Do not stop running to hide yourself under water or in leaves, brush or a crevice because bees are likely to find you and inflict numerous stings.

The single most important thing is to get away from the colony!

When a bee stings, the stinger and poison sack remain in the skin of the victim, even after the bee flies away, and venom continues to be pumped into the skin.

After you have safely escaped the bees, remove stingers from your skin by scraping or brushing them out. The venom of a single Africanized bee sting is no more toxic than a European bee sting (in fact, it’s a little less so). The difference is a matter of dose. Instead of a dozen or so stings, victims of Africanized bees can sustain hundreds of stings. Most people can tolerate 15 to 25 stings without requiring special medical treatment.

Pain, redness and swelling are normal at a sting site and this does not constitute an allergic reaction. People with a history of systemic allergic reactions (fainting, trouble breathing), however, should always carry with them an emergency kit of injectable epinephrine, use it if they are stung, and then immediately see a physician.

Anyone who receives more than 15 to 25 stings should seek medical supervision for possible delayed systemic complications.

• Use plastic-coated gloves instead of leather; bees will sting leather and the embedded stingers contain alarm chemicals that further aggravate the bees.

• Use white-faced veils instead of black. Africanized bees are attracted to dark objects, and a white outer surface minimizes bees massing on the veil and obstructing your vision. The interior side of the netting should be black to minimize glare.

• Smoke hives heavily before entering them; the bees are difficult to calm once angered.

Source: Keith Delaplane, University of Georgia, Professor of Entomology. Mitchell May is the Decatur County Extension Service’s coordinator. He can be reached by calling 246-3033 or by e-mail to uge4087@uga.edu.