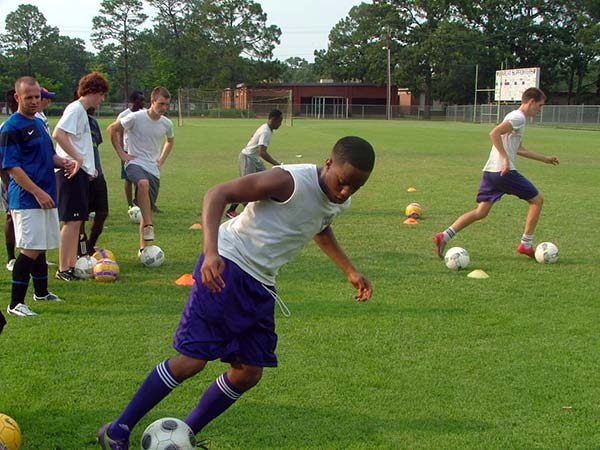 BAINBRIDGE HIGH SCHOOL Bearcats soccer players work on touch controlled dribbling under the watchful eye of their Coach Jamie Ard, back left. Controlling the ball out front are Kimani Crawford, foreground, and Daniel Provence, background. Next to Coach Ard, from left to right, are Noah Thorne, Lenorris Flanders, A.J. Bailey and Brent Noble.

Gill is a native of Ireland and coach of the Middle Georgia Junior College Warriors and Lady Warriors soccer teams.

It all took place at the annual Bainbridge High School Bearcats team soccer camp at the Centennial Field practice field.

Camp sessions were last Thursday and Friday and this Monday and Tuesday from 5 p.m. to 9 p.m. at the Centennial Field practice field.

Hal Clement, who had 26 goals and 10 assists and was the top Bearcats scorer in school history, was the most outstanding  midfielder award winner for coach Ard’s Bearcats in 2011.

Clement has signed a scholarship to play with coach Gill’s Warriors this coming season.

“We are fortunate to have Coach Gill come to Bainbridge and instruct our players each summer,” Coach Ard said. “He teaches them the importance of team play.”