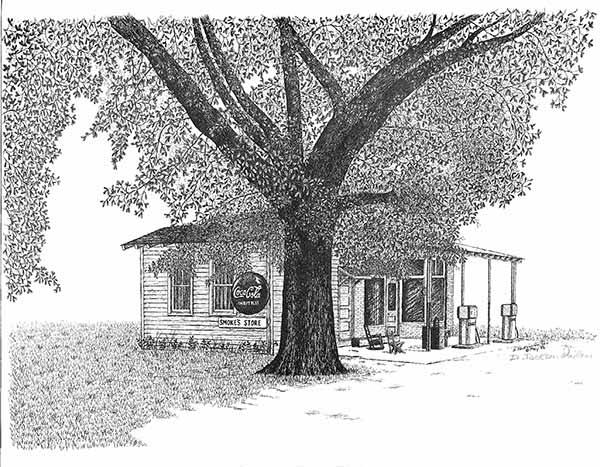 Editor’s Note: The Faceville Country Store was destroyed by fire on May 26, 2011. Gail Mills Brown, who grew up in Faceville and now resides in Dallas, Texas, shared her memories of what she knew as “Smoke’s Store.”

His name was Alton Rogers, but everyone called him “Smoke,” although I never knew the reason. He was not related to me but I referred to him as “Uncle Smoke,” since I was taught not to address adults by their first name. Consequently, the Faceville Country Store that he owned and operated in the 1950s, when I was a child, was called “Smoke’s Store.” My Mama called it “Loafers’ Paradise.” It was the local meeting place for the men of the community to gather and “shoot the breeze!” This is how I remember it…

My Daddy would “go to the store” sometimes in the late afternoon after a long day’s work. If he became involved in some riveting conversation and did not check his pocket watch or the large clock on the store wall, Mama would have me call on the phone to fetch him and Uncle Smoke would yell “Supper is ready, Byron!” Of course, the phone was an eight-person party line where it was possible to “accidentally” listen in on conversations and probably half of Faceville knew Daddy forgot to come home for supper.

This was the place to be…They visited, they debated, and they solved the world’s problems right there at the store! On the front porch were split log benches, polished by the “seats” of time. Weather permitting, here they gathered! In the winter, the potbellied stove served as the conference table for the meeting of their minds. The store was dark and smoky, with a not-so-clean cracked cement floor. The tobacco of choice was cigarettes and not the filtered varieties. If you were not a smoker, it mattered not—the secondary smoke took care of that…They talked politics, religion, national baseball, local basketball, weather, and other people’s business while their ears were peeled to the crackling radio on the shelf. It was the CNN of Faceville. A tiny black-and-white television was acquired at some point, yielding rabbit ears with horrible reception.

Uncle Smoke stocked a variety of things. He sold everything from gasoline and kerosene to sewing thread, a couple bolts of fabric and even socks. Since he was color-blind, you had to select your own thread from the thread box. In order to buy gas, you only had to honk your horn and he would appear with greetings to fill the tank for you.

The only thing I was concerned about was the candy-filled counter which was immediately to my left as I entered the store! My family blamed Uncle Smoke for my many dental cavities. I would climb onto the bench and peer at the candies under the glass. Uncle Smoke would meet me there and give me five silver bells (Hershey’s Kisses) in a tiny brown paper bag. I’m positive he never made any profit at all on candy because he gave it all away to us hungry-eyed country children!

He also had a “CoCola” (Coke) case with a selection of bottled “soda waters” or “belly-washers” that was cooled with large blocks of ice. My favorites were a “Nehi” orange or bottled chocolate milk. The chocolate would settle on the bottom and you would have to shake it vigorously. Sometimes I would agree to an RC Cola and pour a small package of salted peanuts into the bottle and drink and eat all at once. He sold cans of Vienna sausages, potted meat, soda crackers, moon pies, and honey buns. He kept a large hoop of “rat” cheddar cheese on the counter. Being kind to everyone, he ran a heavy line of credit for those who could not pay.

The store was a busy place and the center of the community. It has changed ownership over the years several times and was eventually modernized. Gone are the benches and potbellied stove. Gone is the block of ice in the drink box. Gone is the old-fashioned crank gas tank. Gone is the candy case and gone is Uncle Smoke in his overalls handing out free candy at the candy counter.

The peaceful memories I have of this simple life envelops me today. It was a great time. For me, Uncle Smoke’s Store will always be more than a landmark of Faceville.