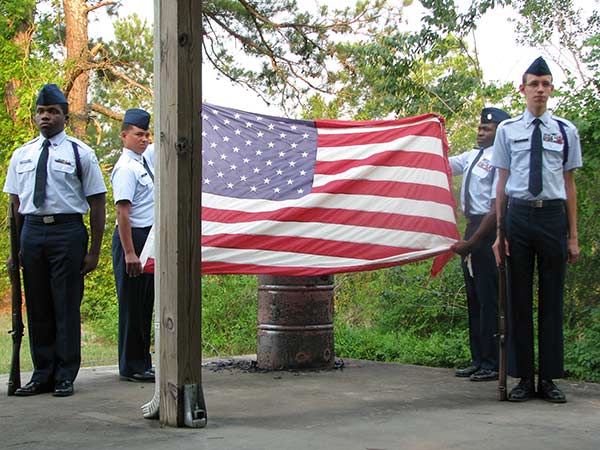 HONORING OUR NATION’S COLORS at a flag retirement ceremony held at the Veterans of Foreign Wars in Colquitt, Ga., on Thursday evening were Bainbridge High School Air Force Junior ROTC cadets Sudderth, Lagace and Emannuel. The purpose of the ceremony was to promote American heritage and provide a community service by honorably disposing of worn U.S. flags.

The city of Climax’s annual Flag Day celebration today will feature a parade and a flag retirement celebration in Parker Park.

The parade will begin at 10 a.m. in front of the Head Start Center, formerly Climax School.

It will include floats, walkers and bicyclers, all prominently displaying the American flag. Following the parade, the celebration will continue in Parker Park.

Attending veterans will be recognized along with Climax Mayor Charles Hadsock and members of the city council at the park.

There will be a flag retirement ceremony and the raising of new American and Georgia flags by the Bainbridge High School Air Force Junior ROTC honor guard who will also march in the parade.

Special recognition will be given to the late veterans Paul Maloy and Clifford Wells, who passed away since Flag Day 2010.

In 1916, President Woodrow Wilson issued a proclamation that officially established June 14 as Flag Day; in August 1949, National Flag Day was established by an Act of Congress.

The week of June 14 is designated as “National Flag Week.” During National Flag Week, the president will issue a proclamation urging U.S. citizens to fly the American flag for the duration of that week. The flag should also be displayed on all Government buildings. Some organizations hold parades and events in celebration of America’s national flag and everything it represents.