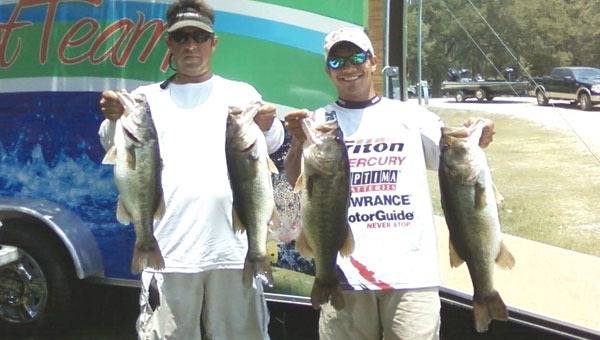 PAUL TYRE AND NIC JETER with their winning catch of 26.93 pounds in the Media Bass Tournament. 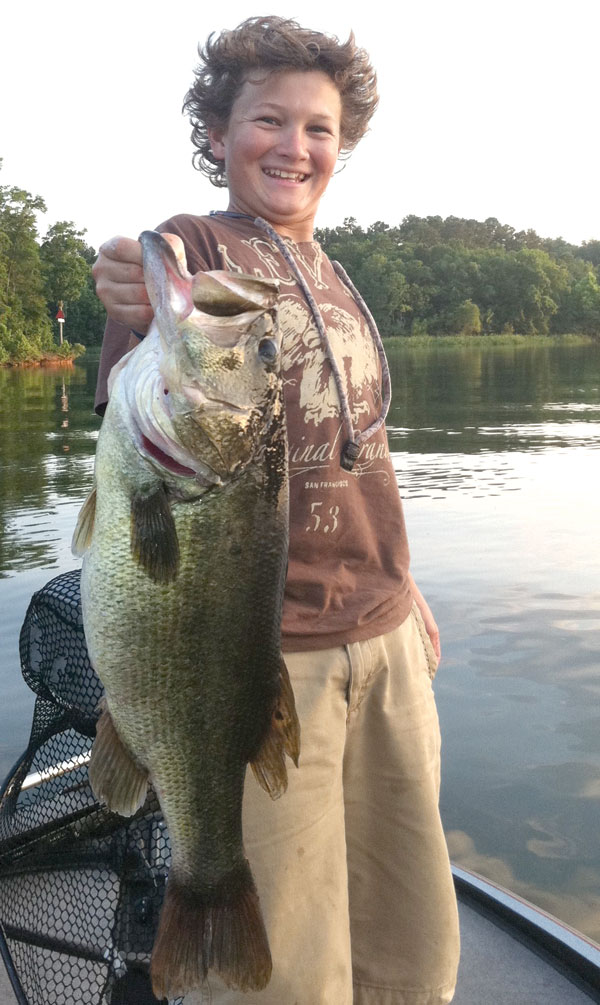 JAKE JETER of Faceville, Ga., with a huge 8.2-pound bass he caught this week.

I’m just plain sick at my stomic, Matt Dillon of Gunsmoke is dead, not in the streets of Dodge but in a bed, I thought he mite live forever? Clint Eastwood will be next!

Please; let this scribler have a little lee-way about Memoreal Day. Hero’s, who gave there all and more. Roun Faceville, Mr. Buck Dukes son Campbell was killed on GuadelCanal, his baby sister was the recipient of the Golden Star then her son was killed in Korea. She had two Stars in her window, Alan Cox, born and raised on Duke Wells road had several blimps shot out of the sky off of Key West, he took a position of Tail Gunner on Patrol Planes, several of them were shot down. With the war over, he came home and worked until the Korean war, he served a commission in the Army and took it. He made it to full Colonel in the Vietnam War.

Frank Browns older brother was wound in the arm and when asked what he shot, he sed, a Garand, for the Bood Singer Sewing machine made thousands of them.

I knew three World War I Veterans, two of them were bad eggs when they came home and one was nice as you please and is buried in Bettstown.

Billy Sellers left home for the war, about 18 months later he came home with not a hair on his head. He left with a full head.

Sorry to take your time, but I just like to think back. There are many more like Quincey Phillips, who sat on a rusty ship and watched the bombers come in and destroy Pearl Harbor. He was not harmed.

There has been a lots of catfish caught this week, among them was four great big channels, they were cut up good and made fingers out of them. Many bream and shellcracker was therefore taken.

Beds sprouted up all over the place Friday and Saterday, there was lots of folks on the Lake after them.

David Mock practiced fishen for the A.B.F. this past Saterday when he hooked, landed and weighed and released a 9-pound bass.

The C&R fished Saterday with Sean Neel and Matt Neel taking first place with 17 pounds. They also had big fish at 6.2 pounds.

The Lake City Bass Busters Father and Son Tournament turned out like this: First place went to Chester and Mikey Johnson with 19 pounds and big fish at 7 pounds, second place went to Dewey and Dewey Jr. with 14 pounds. They had a great time for thier Spring Trip to Seminole.

Paul Tyre and Nic Jeter won their third tournament in a row, the Media Bass Tournament. They had 26.93 pounds to take first place. Brad Hamrick and Jason East took second place with 25.561 pounds, and Clint Brown and Terry Stevens took third with 22.52 pounds. Big Fish was caught by Bailey Gross and Joel Andrews and weighed 8.61 pounds.

This week the bass had their heads stuck in the mud but Thursday they came alive and I mean alive. Since then it’s been very nice fine bass came across the dock.

Thanks to Avon Cruse, we have another report of Red Belly’s being caught deep. His came on Beetle-Spins. He also had shellcracker and crappie on them.

No one seems to be able to catch Blue Gil even though the Willow Flies are out. Sad thing.

Paul Tyre and Nic Jeter won another tournament this weekend, the Bainbridge Bass Club’s Memorial Day Tournament. This is their second win in a week. This week they caught 25.4 pounds of fine looking bass. It was so hot on Sunday that everyone was having a hard time keeping their fish alive. Rejuvenate and Ice, that’s the ticket.

Lake level: Down and fast