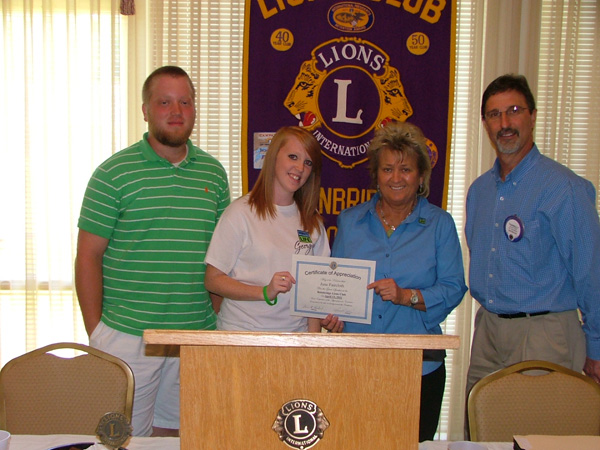 JUNE FAIRCLOTH, third from left, and Allison Webb, second from left, hold a Bainbridge Lions Club certificate of appreciation from club President Harrell King, right, after they and Jordan Cox, left, addressed the club Wednesday on the importance of becoming organ donors.

June Faircloth, representing Donate Life Georgia a part of LifeLink of Georgia, told members of the Bainbridge Lions Club Wednesday that they have the power to donate life to others through organ donation.

She began by telling the story of how her son, Dylan, died in an automobile accident and how his organs live on through others.

He had also spent three summers studying at Duke University where he was part of a research program.

“By being an organ donor, which he had noted on his driver’s license, Dylan lives on through others and that is comforting to know,” Faircloth said.

Stan Gann, a retired high school football coach in Warner Robins and former quarterback at Georgia Tech, received his heart and Faircloth said Gann is like a member of her family.

Gann was here for the first Dylan Reid Faircloth the First Epic 5K Run in October at Spring Hill Christmas Tree Farm to raise money for a scholarship in honor and memory of Dylan.

Dylan’s organs and tissue helped Gann and a number of other people, Faircloth said. Two mothers, who were on kidney dialysis treatment, received his kidneys and are doing fine, a mechanic in Georgia received his liver and an 11-year-old boy received his cornea.

“It is our hope that more people will step up and become organ donors,” Faircloth said.

Two young people, who Dylan influenced in a positive way, addressed the club along with Mrs. Faircloth.

The second was Jordan Cox, a member of the Fellowship Baptist Church youth group with Dylan and a junior infielder and right-handed pitcher with the Bainbridge High School Bearcats baseball team.

Webb and Cox talked about the positive influence Dylan had on their lives.

“Dylan could always make people smile and feel good about themselves,” Webb said.

Webb continued her remarks by pointing out that more than 100,000 Georgia men, women and children are currently in need of life-saving transplants and an average of 18 people die daily due to a lack of available organs.