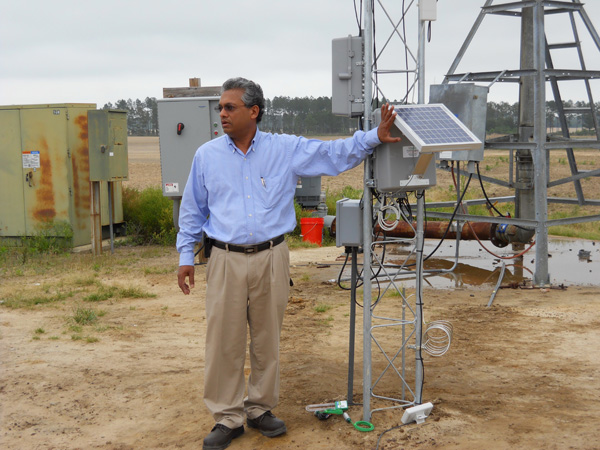 EXPLAINING THE CAPABILITIES of the i-Linc Technologies irrigation control system is company president and CEO Gopal (Paul) K. Gupta, in a demonstration held at the Glenn Heard farm Friday.

A demonstration of the latest technology for agricultural use was held at the Glenn Heard farm off Highway 84 Friday morning.

Sponsored by Decatur County Board of Commissioners, it introduced a Wimax, (wireless Internet) supported farm irrigation management system to attendees.

Introductory remarks from County Administrator Tom Patton included a brief history of how and why the county started to become involved in getting high-speed Internet service to the rural areas. Patton said they started talking to people four years ago and centered their efforts on farm people who were underserved.

The results are that Mainstreet Broadband now has high-speed Internet coverage to 80 percent of Decatur County, and expects to have full service by the end of the year after the addition of two more towers.

Patton said Glenn Heard was a leader in this irrigation initiative, as he is the first farmer in the area to install the i-Linc technology irrigation management system.

“No place else in the United States has this technology,” said Patton.

The main goal of the system is to conserve water and energy while maximizing yields, explained Patton, who said he believes the water wars are far from over, and Decatur County can now tell the people in Atlanta what is being done here to conserve water.

i-Linc Technologies President and CEO Gopal Paul K. Gupta explained the remote base system that has been installed on the Heard farm. Calling it “The Cadillac system,” Gupta said it determines the soil moisture, the pH level in the soil and the air temperature. The farmer can turn on the irrigation system from a computer in his office or laptop, based on information obtained from the base unit. It can also change speed and direction of the irrigation system and regulate the water pressure, thus conserving water.

Loss of data from a power failure is not a problem, as there is solar and battery backup, and data is kept in the system for 30 days.

An additional benefit is the camera system, which enables the farmer to check on his fields and buildings on-line. This could help in theft reduction, as well.

Heard said the demo farm was the first of his farms to have the system installed and he was testing it to see how cost effective it is. The system can be enlarged to connect to multiple farms. The ability to automatically turn on the systems without sending workers into the fields is a plus.

“It can save time in a busy season,” added Heard.

While irrigation systems exist that can be programmed and operated from a cell phone, this system is said to be less expensive to operate and has more capabilities.

Patton said they plan to introduce the system to all of Decatur County farmers in a few weeks.

“This is our first step in helping the local economic locomotive,” Patton said.