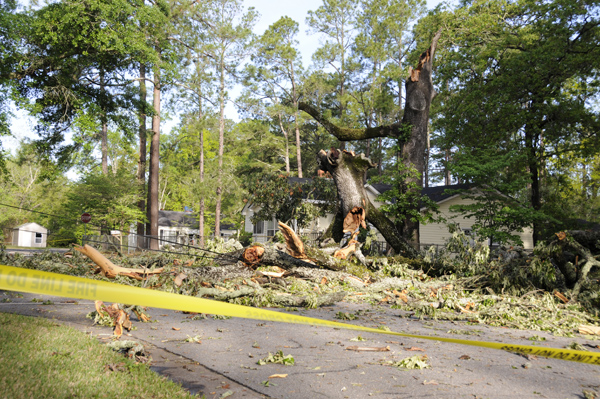 Bainbridge College campuses in Bainbridge and in Early County were forced to close because of the storm. Decatur County Schools and Grace Christian Academy were closed because of spring break.

Power companies and other utilities affected by downed lines were out Tuesday surveying the damage. Carol Boatright, a spokeswoman with Georgia Power, said as of 4 p.m. Tuesday, there were 4,300 Georgia Power customers without power. As for how many were affected at the height of the power outages, she does not have that figure except for statewide, which was 440,000 customers. As of 4 p.m. Tuesday, 87,000 customers statewide, and 11,000 in the southern region of the state, remained without power.

A large metal roof on a hay barn next to 154 Smithtown Road in southwestern Decatur County was completely blown off.

There were also reports of trees falling on residences on Hubert Dollar Drive and in the 2200 block of Twin Lakes Drive, where the residence of Charles Murphy had extensive damage from downed trees. One went through the roof just over the guest bedroom, creating a large hole and causing water damage to the walls and floors.

Across the street, the residence of Georgia Gruber was also hit by the debris, carried from the Murphy home by the high winds. A limb went through the back side of her house, pushing a hole in her roof all the way through to the attic. Gruber said the path of the storm could be visibly tracked by the downed trees and damages to the several homes in that block.

Insurance agent Billy Inlow said he’s already been to six homes Tuesday assessing claims from wind. Tuesday’s weather claims are in addition to the hail damage claims that occurred last weekend when the northern end of the county suffered significant damage from hail.

Inlow said Tuesday’s damage was caused from downed trees, such as limbs falling on a corner of a house. In the case of a claim handled by Todd Martin’s insurance firm, a tree had fallen on top of a pool house.

“This estimate includes damage to cars as well as homes and businesses,” Hudgens said. “Based on what I saw today, I believe we have reached $32 million.”

All of Southwest Georgia and the Big Bend of Florida were under tornado watches early Tuesday morning. There were tornado warnings in Mitchell and Colquitt counties in Georgia and around the Florida cities of Quincy and Tallahassee at about 3 a.m.

Two people—an inmate cleaning up storm debris and a county employee involved in a weather-related car crash—died in Colquitt County, according to WALB-TV. The TV station reported that the town of Damascus in Early County was without drinking water.

Official weather gauges in Bainbridge and Attapulgus recorded 0.65 inches of rain overnight, 1.36 inches of rain fell at the Donalsonville Airport. Maximum wind speeds of 34.6 miles per hour were observed at 3:01 a.m. at the University of Georgia’s Attapulgus Research Farm.

In Grady County, 1.51 inches of rain and winds of 42.2 miles per hour were observed.

Tuesday’s storm was the latest in a string of significant weather incidences for Decatur County in recent days.

More than 2.37 inches of rain fell on Bainbridge on March 30. A storm brought hail, rain and damaging winds through Decatur and Miller counties on the evening of March 27.