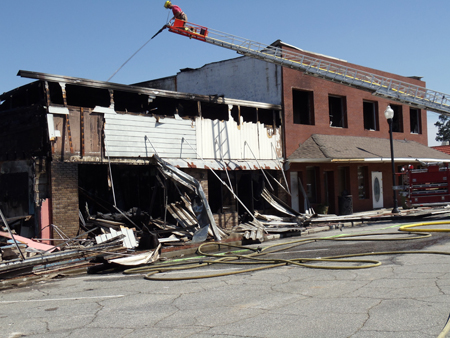 A firefighter sprays water on one of the buildings on Cherry Street in downtown Donalsonville that was destroyed by fire in the early hours of Tuesday, April 5. A lightning strike was cited as the probable cause of the fire, which broke out at about 1 a.m. Tuesday. | Donalsonville News

Firefighters from Bainbridge and Decatur County helped fight a large fire that consumed six businesses in downtown Donalsonville, Ga., in the early hours of Tuesday, April 5.

Lightning was cited as the probable cause of a fire that broke out on Cherry Street in Donalsonville, about 21 miles west of Bainbridge along U.S. 84, at approximately 1 a.m. Tuesday.

City of Donalsonville firefighters had been fighting the fire for approximately two hours when it grew in size to engulf several small, one-story commercial buildings.

“When we arrived, the fire was fully involved,” Doyle Welch said. “The wind was blowing strong and pushing the fire toward us.”

Welch said he was up in the ladder truck’s aerial platform spraying water on the fire until about 9 a.m. Tuesday. When BPS firefighters left, other firefighters were still taking care of hot spots and the destroyed buildings were being excavated.

The fire was difficult to fight not only due to the weather conditions but also due to the building’s construction and close proximity to each other, Welch and Captain Kenny King of Decatur County Fire and Rescue said.

Welch said flames got up underneath the building’s tin roof, making it tough for firefighters to spray water onto part of the fire.

Capt. King said he responded to the fire along with Decatur County Fire and Rescue’s Eddie Polk, five inmate firefighters and a couple of volunteer firemen. Fire and Rescue brought an engine and a rescue truck to the fire.

The businesses in the destroyed buildings included a weightlifting gym, a pool hall, a gift shop, two hair salons and an insurance agency.

There’ll be a change in the weather

I was listening to the radio last week and heard that some parts of the country did not have a... read more