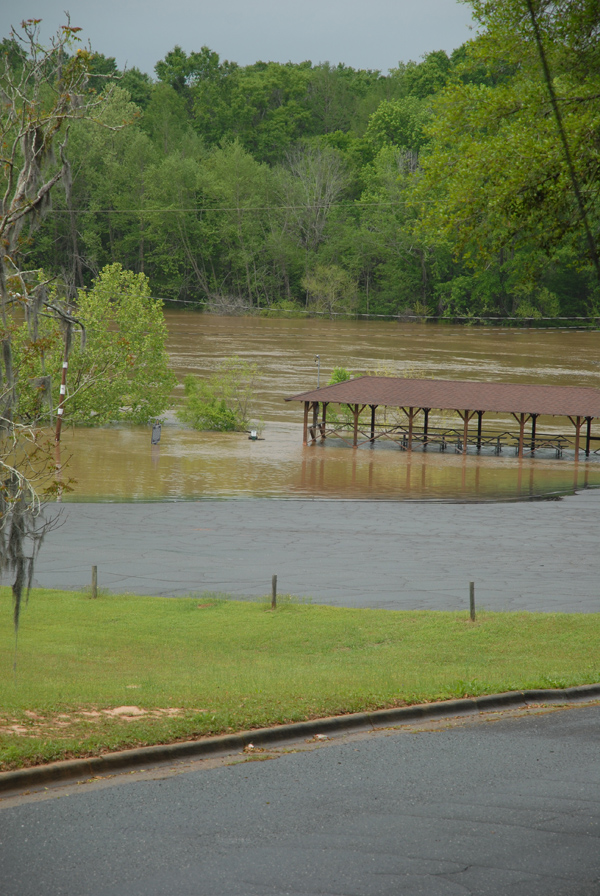 COMING UP WITH A PLAN is one way of preparing for any type of flooding, which Decatur County has had its share of. This flooding took place in 2009 along the Flint River.

Emergency officials are encouraging residents to prepare for floods this spring

During her 20 years of experience working at the American Red Cross, Sherry Beam had met more disaster survivors and heard more cautionary tales than she could count. However, when she waded into her living room one fateful afternoon in 2009 and looked at the 2 feet of muddy water that had flooded her house, she had the same thought as many of those survivors: “I never thought this would happen to me.”

Beam’s home was one of thousands that suffered damage in floods that affected North Georgia that fall.

Flooding is the most common weather-related emergency in the United States, occurring somewhere in the country nearly every day of the year, according to the National Oceanic and Atmospheric Administration.

However, like Beam, most residents think disasters won’t happen to them until it’s too late. Research from the Georgia Emergency Management Agency’s (GEMA) Ready Georgia campaign found that nearly 80 percent of Georgians are not fully prepared for a disaster.

With April showers on the way, emergency officials across the state are urging residents to prepare themselves for possible floods.

“Flooding can be extremely dangerous and costly, but just a few minutes of preparation can make you and your family much safer,” said Lisa Janak, spokesperson for GEMA. “Do you know the at-risk areas for flooding around your home? Do you have a kit with emergency supplies ready? These are the things you need to ask yourself to be prepared.”

The best place to start getting ready for a flood, according to Janak, is to create a ready kit filled with supplies you will need in case you are stranded. Kits should include at least a three-day supply of nonperishable food and water, first aid supplies, a flashlight and a NOAA weather radio. Georgians can create a custom checklist of emergency supplies and an emergency plan online at www.ready.ga.gov, the state’s disaster preparedness site.

Beam recommended looking at flood insurance policies. She didn’t realize her insurance only covered damage to her house and was left to foot the bill for her ruined furniture and appliances after the flood.

She also regretted not creating a family plan for what to do in case an emergency happened.

“My son was home alone when the flood came in our house. Silly of me to think I would always be with my son if a disaster happened,” Beam said. “A disaster comes so quickly—either you are ready or you’re not. Make sure you and your family are ready and know exactly what to do. It will feel good in your heart knowing your family will be safe if you are there with them or not.”

According to the National Weather Service, more deaths occur from flooding than any other form of severe weather, and half of these deaths result from vehicles being swept downstream. As little as 6 inches of water can cause a driver to lose control of a car, so Janak recommends never driving through flood water. She said staying informed about the weather is critical to staying safe.

Aside from creating a profile at the Ready Georgia website, Janak also added that the Federal Emergency Management Agency’s www.FloodSmart.gov website has useful information about flood insurance.

“Do yourself a big favor-be prepared for anything, and start today,” she said. “Tomorrow may be too late.”