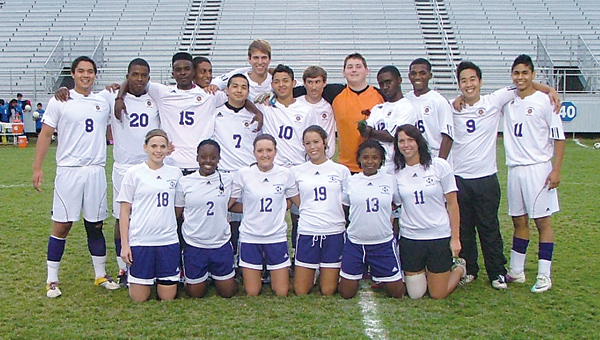 The Lady Cats, who are 8-6 overall, will advance to the first round of the Region 1AAAA playoffs at a yet-to-be-determined place and time.

They took control of Tuesday’s game early, jumping out to a 4-0 first-half lead.

They took a 1-0 lead in the seventh minute when junior midfielder Charlton Reynolds sent a through pass forward to senior midfielder Robbi Howard, who kicked in a breakaway crossing shot from 10 yards out.

The Lady Cats increased their lead to 2-0 in the 12th minute when Howard, who had taken the ball to the end line, sent a drop pass to senior forward Bailey Wells, who scored on a shot from the right side from 12 yards out.

Wells scored her second goal of the night in the 33rd minute, kicking the ball into the net from 10 yards out in the center of the penalty box to increase the Lady Cats lead to 3-0.

Senior defender Candace Perkins gave the Lady Cats a 5-0 lead in the 64th minute when she looped a chip shot over the Lady Panthers’ defender and goal keeper’s head and into the net. The goal was set up by a corner kick on the left side by Cook.

Pearson scored her second goal of the night in the 65th minute on a breakaway shot from six yards out after taking a well-placed diagonal pass to the left side from sophomore midfielder Isis Crawford.

Senior midfielder April Thomas scored the Lady Cats seventh goal of the night from two yards out after taking a well-placed diagonal pass from Howard on the left side and getting behind the Lady Panthers’ goal keeper.

“It was a good team win,” he said. “I was especially happy for our seniors to get a good win in their last home game. They did a good job of possessing, passing to space and finishing shots, which were all things we worked on in practice.

“It was also good to see all of our seniors play a big part in the victory. Bailey Wells, who had two goals and Robbi Howard, who had a goal and two assists, paced the attack while fellow seniors Candace Perkins and April Thomas scored a goal apiece. Perkins and Jessica Dunap combined in goal for the shutout.

“Another important senior is captain Lindsay Unfricht. She was injured in the season opener against Cairo, but she has provided invaluable leadership all season, uplifting teammates and helping develop our goal keepers.”