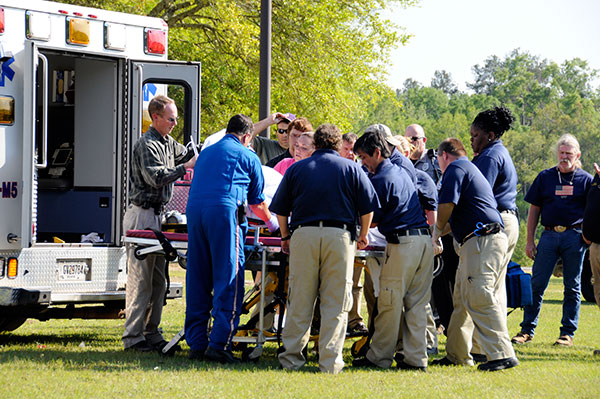 EMERGENCY MEDICAL PERSONNEL are assisted by surgeon and reserve Sheriff’s deputy, Dr. Alan Wilson, left, in transferring a boy whose hand was badly injured in an explosion Friday afternoon from an ambulance to a waiting emergency medical helicopter. The helicopter landed in the Earle May Boat Basin and after picking up the patient, took him to Tallahassee Memorial Hospital.

A 10-year-old boy was seriously injured Friday afternoon as the result of an explosion, the cause of which was not immediately known.

T.J. Andrews, 10, was in the back room of his grandmother’s hair salon, Riverside Haircuts at 1035 Faceville Hwy., when the accident happened shortly before 4:30 p.m. Friday.

County Administrator Tom Patton, who was having his hair cut in the shop, said he heard a loud explosion that blew the door separating the salon from a break room area off its hinges. The young boy, whose hand was bleeding badly, came out into the salon area. Patton said he used a towel to apply a tourniquet to the boy’s hand until paramedics arrived.

BPS Cpl. Craig Carr, the first officer to arrive on scene, called out on his radio for EMS to respond as quickly as possible. An ambulance took the injured boy to the Earle May Boat Basin, where an emergency medical helicopter picked him up and transported him to Tallahassee Memorial Hospital, according to BPS. 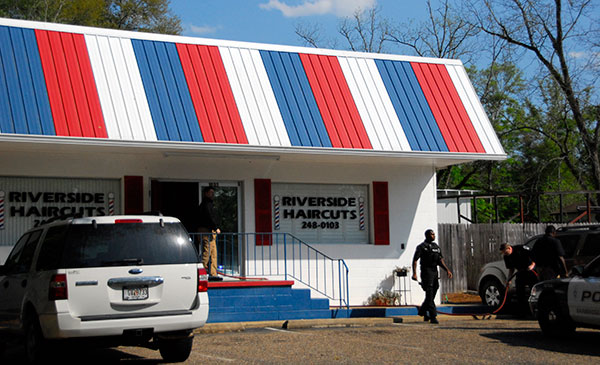 BPS OFFICERS secure the scene outside Riverside Haircuts, 1035 Faceville Hwy., where a 10-year-old boy badly injured his hand in an explosion inside the back room of the salon late Friday afternoon.

However, it could not immediately be determined whether the explosion was caused by chemicals or from another source, BPS Assistant Fire Chief Marty Brown said. There was no city natural gas line connected to the building, BPS Fire Chief Dennis Mock said. Brown said firefighters believe the explosion was centered around a sink in the back room, as the blast blew off a knob on the sink. Firefighters used a fan to remove the apparent chemical vapors from the salon.

Andrews, who was identified by family friends, is the grandson of Martha Martin, who cuts hair at the salon. He’s a member of a Bainbridge traveling baseball team, who his coaches said is an excellent athlete.