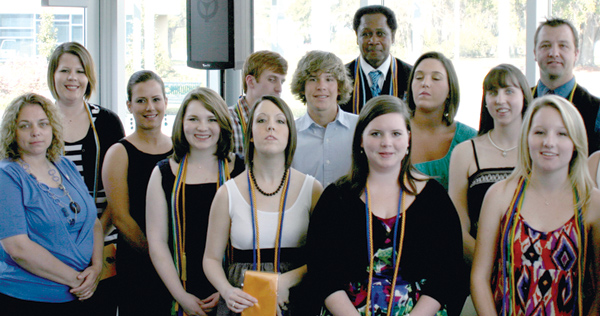 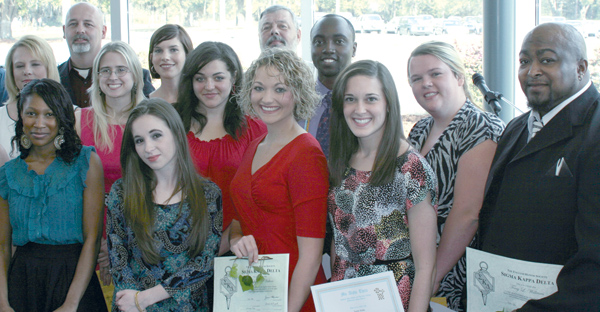 Three honor societies at Bainbridge College inducted their respective members in a collaborative ceremony in the Charles H. Kirbo Regional Center on the main campus.

Members of the honor societies who are to graduate in May received the honors cords of each of their respective chapters to wear at commencement. They include Tevin Akins, Jessica Bostick, John D. Burch, Summer Day, Charles Dragovich, Emily Hiers, Shaquera Moore, Stamey Myrick, Leon Perkins, Jason Sellars and Jana Simmons.

In addition to assisting in presenting their members and distributing honors cords and membership certificates, faculty advisers of the three honor societies recognized officers of their respective chapters.

The honor society exists to enhance scholarship and interest, enjoyment and understanding of mathematics. Founded in 1957 in Oklahoma, MATH granted the charter for the Bainbridge College chapter in 2009.

Founded in 1918 in Missouri, PTK has the two-fold mission to recognize and encourage academic achievement of two-year college students and to provide opportunities for individual growth and development through participation in honors, leadership, service and fellowship programs.

Founded in 1996, SKD chartered the Bainbridge College chapter in 1997, the first in Georgia. The honor society strives to encourage high achievement in English language and literature in two-year colleges, foster the discipline of English in the community, and exhibit academic excellence.

Inductees received sprigs of ivy and SKD pins that represent the society’s colors of green and gold. The certificates they received give students rights of membership, privileges to attend local and national activities, and responsibilities, including the active participation in the chapter so that membership is more than merely accepting the honor.

Faculty advisers who were presenters during the event were Ms. Coston, who opened the program and welcomed the audience of almost 100 students, faculty, family and friends; Dr. von Hirsch, who introduced Bainbridge College President Richard Carvajal as the featured speaker; Ms. Coston, Ms. Grimes, Dr. Stewart, and Dr. LaFace, who also presented a gift to President Carvajal at the close of the ceremony.

In his brief remarks Carvajal discussed the characteristics of a scholar, which include expectations of knowledge, wisdom and service. He encouraged the honorees to make their achievement of honor society membership more than an entry on their resumes and to contribute their intellectual and academic gifts in community service, in outreach to individuals and communities. Thus they will make a difference in the life of one and the lives of many.