Those born on Lake Seminole 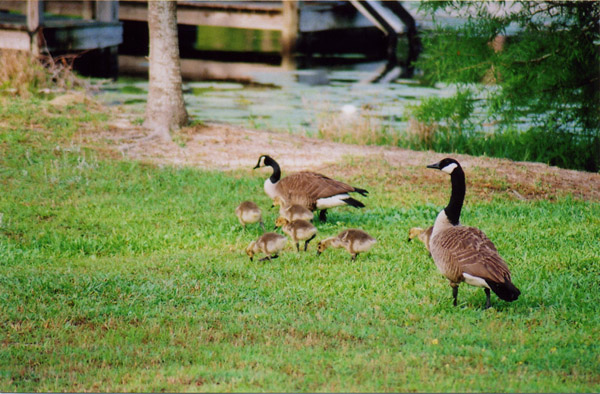 CANADA GEESE mate for life. If one dies before the other it is rare for the one left to take another mate.

The wildlife babies that are born on Lake Seminole are amongst the cutest and cuddliest in nature.

All of them start out life very delicate. Their lives are dependent upon a lot of variables. Some need a lot of help for several months. Then, some need a couple of years before they can take reasonable care of themselves.

They seem so delicate.

However, they have a courage and a toughness about them, a sort of determination to stay alive. These traits, plus sharp instincts, help ensure the continuation of their species.

Lets take a closer look at some of Lake Seminole’s most visible wildlife babies.

One of the largest birds on the lake is the great blue heron. He stands tall and ever so still, careful not to make a sound. This bird is king of all he surveys, for a full grown great blue has few natural enemies. However, for the baby, life is a constant challenge.

The blue heron starts out hatching from an egg that was laid in a nest built from sticks and placed in a tree or near the ground in tall marsh grasses. Both dad and mom build the nest, and they will take turns incubating the eggs. Usually, there are five eggs in this home. If by some chance the nest is destroyed and there is still time, the parents will rebuild and the female will lay replacement eggs.

The eggs will hatch in about three weeks time. Then both parents will care for the chicks. For several months they will feed them regurgitated food.

As the baby chicks grow, the parents teach them to fish. This will come easy. Now, the chic will grow rapidly and be large enough to be on his own in a little over a year.

Another avian couple that takes care of its young together is the Canada goose. During the second season of their lives, the geese will find a mate and their union will last a lifetime.

They will share the parenting of the little chicks, which usually number four to eight. Both set on the nest, but the female spends more time there than the male. The eggs hatch after about 28 days.

For protection, the mom and dad travel with the goslings in a straight line, one in front of the other, and in between them. Mom and dad will violently attack a predator that is a danger to their young, no matter what the size.

The babies start to explore a little on their own when around nine weeks old. They do not leave their parents until after a year. They then return to the place of their birth and begin to look for a mate.

However, not all bird parents are as protective as the great blue heron and the Canada geese. The Moorhen sees parenting in a different light. The female does all of the raising of the chicks herself.

Their nests resemble a basket that is built on the ground in dense vegetation. From mid-March to mid-May the female lays her eggs, usually numbering six to eight. The female stays on the nest. Incubation takes about three weeks.

Most females raise the chicks on their own. However, mothers do join forces and help each other out.

The fledglings usually are independent after about two months. However, when an enemy threatens, they still cling to their mother until they are about one year old. Then they start nests of their own.

We don’t want to forget our local reptiles, namely the gopher tortoise. This is a creature that has been around for millions of years; a species that was in existence long before man began to record history. Now he is on the endangered specie list.

The female gopher tortoise doesn’t reach adulthood until she is about 20 years old. The gopher tortoise breeds from April to June. She builds her nest by digging a large hole with very wide and strong flat claws. Her legs are protected by scales so she can dig without injury. A nest is built close to the one in which the female was hatched. This provides an extended family to help in raising the young.

Although she does not set on the eggs, she does not abandon the nest. She knows that the eggs are vulnerable to predators at this time as well as when the babies are first hatched and she will protect them. Once baby’s shell hardens, the mortality rate goes down. However, their shells do not do this until they are about seven years old. Hatchlings live in their parents burrow until they are mature, about 15 years old. Then they will strike out on their own but they rarely venture too far from home.

The turtles that populate Lake Seminole have a different approach to parenting. Like the tortoise, they too date back millions of years. However, this is where the similarity ends.

Turtles live around and in water but lay their eggs on land. These are slightly soft and leathery and are elongated in shape and are very tiny.

Turtles are very prolific egg layers with large numbers deposited in the hole the mother digs in mud or sand. Then she covers them. Unlike the gopher tortoise, she leaves her eggs to incubate by themselves. When hatched, they squirm their way up through the dirt to the surface and head toward the water.

Most of the eggs do not hatch. If they do, the babies have a hard time surviving and growing up to the point where they can take care of themselves. For these delicate little ones, often their trip down to the water does them in and they die of exhaustion.

No specie of turtle has mothers who care for them. They are left to their instincts and luck right from the beginning.

We can all help to make sure that the babies of Lake Seminole grow to maturity and continue their species. A little kindness to these small, harmless creatures is all that is needed. We are all God’s creations. Lets help keep them around for our grandchildren to enjoy and wonder at their wild ways.

Joyce is an officer and Dale is a coxswain in the Coast Guard Auxiliary, Flotilla 83, Lake Seminole. They can be reached at kramers229@aol.com.