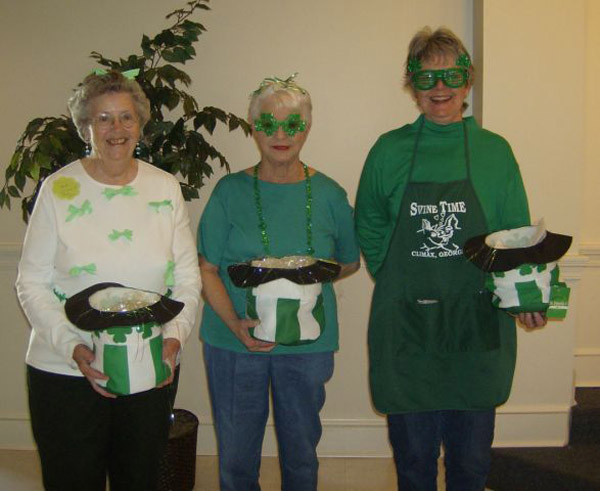 WINNERS OF ST. PATRICK’S DAY costume contest were: Fannie Wells, best all around; Diane Gibson, most creative, and Danna Sue Hadsock, most unusual.

The Climax Golden Agers celebrated St. Patrick’s Day with everything, including the food, all green at their regular meeting held at the Baptist Church on March 16.

Greeting everyone as they arrived was a large green and gold sign announcing, “Happy St. Patrick’s Day.” Then everyone was interested in hearing from Marge Jones at the sign-in table, as she was wearing her, “I kissed the Blarney Stone” T-shirt and had a picture for proof that she actually did just that.

Jones shared many interesting tidbits about the trip to Ireland she had taken in 2008. She also displayed a shillelagh she had gotten on the same trip.

After settling down from the excitement, President Rita Dodson welcomed all, including special guests Jan Harrell and Ramona King. Marguerite Plitnick gave a devotional reading, after which King gave a most entertaining program of jokes and song from the 1950s era.

Many could relate to this as they were teenagers during that time. Rita Dodson said this brought back many memories as she and her husband, Phillip have a 50th wedding anniversary coming up next month.

One example of the jokes was: “One in every three persons is ugly! Look to your right, if that person isn’t ugly look to your left, if that one isn’t ugly either, then guess what?!”

Many members had dressed in costumes decorated for St. Patrick’s Day with all manner of designs. Judging was going on during the meeting, and winners announced at the end were: best all around-Fannie Wells, most creative-Diane Gibson, and most unusual- Danna Sue Hadsock.

Several were remembered in prayer due to sickness or other concerns: Tony Williamson for surgery, Jennifer Moore, the Ken Ganious family, Pearle and Lee Hamilton, Estelle Medley (Rita’s mother), Ginger Harrison, who is having problems with her shoulder, and all victims of the tragedy in Japan.

It was announced that everyone should wear their Easter bonnets next month as there will be a fashion show. This includes men too, who can decorate their favorite hats anyway they want for Easter, including fishing and sports hats.

Marlene Free announced that adult volunteers were needed for Special Olympics to be held in April. Anyone interested may call Katherine Vanstone at the library.

Mark you calendars for next month, the Wednesday after the second Sunday. Meet at the Climax United Methodist Church wearing your Easter bonnet.