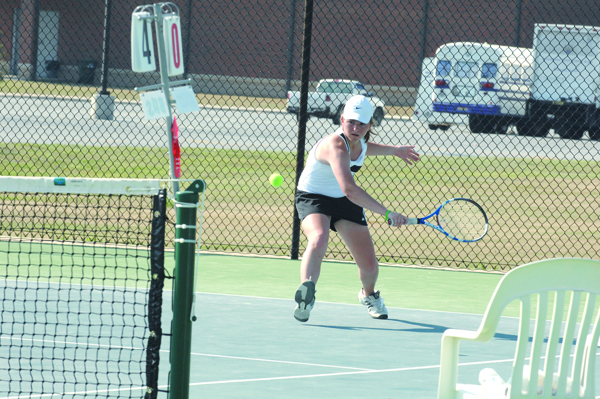 ANNE REYNOLDS of the Bainbridge High School girls’ tennis team gets ready to hit a backhand volley during a Tuesday match versus Lee County.

Nolan Lovering and Josh Smith won their doubles match, as did Scott Overman and Will Dozier, but the boys team fell 2-3 to the Yellow Jackets.

Both the boys and girls teams lost 5-0 to Lowndes County’s Vikings and Lady Vikings at the Viking Invitational on March 18 in Valdosta, Ga. In consolation play on Saturday, the girls lost 2-3 to Berrien County, while the boys won 5-0.

Hosting Class AAAAA Colquitt County in Bainbridge on March 17, Lady Cat Anne Reynolds won her No. 2 singles match but the BHS girls lost 1-4. The boys also fell to the Packers 0-5.

The BHS tennis teams’ next match will be Thursday, March 31 at home against Miller County.