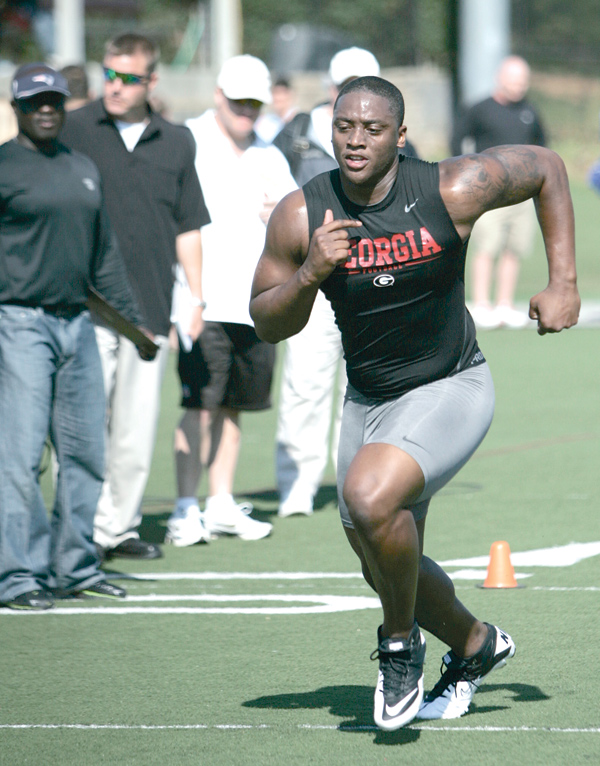 Former Bainbridge Bearcat Darryl Gamble runs through a drill in front of NFL scouts during UGA's Pro Day in Athens on Tuesday.

Two more former Bainbridge football players are waiting to see if they will get the chance to play professionally in the NFL.

Those players are Arkansas’ Ray Dominguez and Georgia’s Darryl Gamble.

At six feet, four inches tall and 335 pounds, Dominguez was a force to be reckoned with as a tackle on Arkansas’ powerful offensive line last year, which helped the Razorbacks to the Sugar Bowl.

But after his college career ended and preparation for April’s NFL draft began, Dominguez had to adjust from starting at tackle for three years in college to playing guard, where NFL scouts think he will be best suited. He played guard in February’s NFL Players’ Association All-Star game in San Antonio, Texas.

Dominguez had good workouts in front of pro scouts at the invitation-only NFL Combine at the Indianapolis Colts’ stadium and also at a special Pro Day held on Arkansas’ campus in Little Rock.

“Going to Indianapolis for the combine was humbling,” Dominguez said at a press conference after Arkansas’ Pro Day. “They select 300 guys out of thousands of players. To be named in that group of tremendous players—I’m just truly blessed.”

Dominguez’ strong workouts and his smart, friendly personality have reportedly impressed scouts and some draft analysts predict he will be selected as high as the 3rd through 5th rounds of the seven-round draft. The New York Jets are one of the teams interested in Dominguez, he said.

Gamble was left off the NFL Combine invitation list, to the surprise of many UGA fans who watched his aggressive, consistent play as a starting linebacker during his junior and senior seasons. 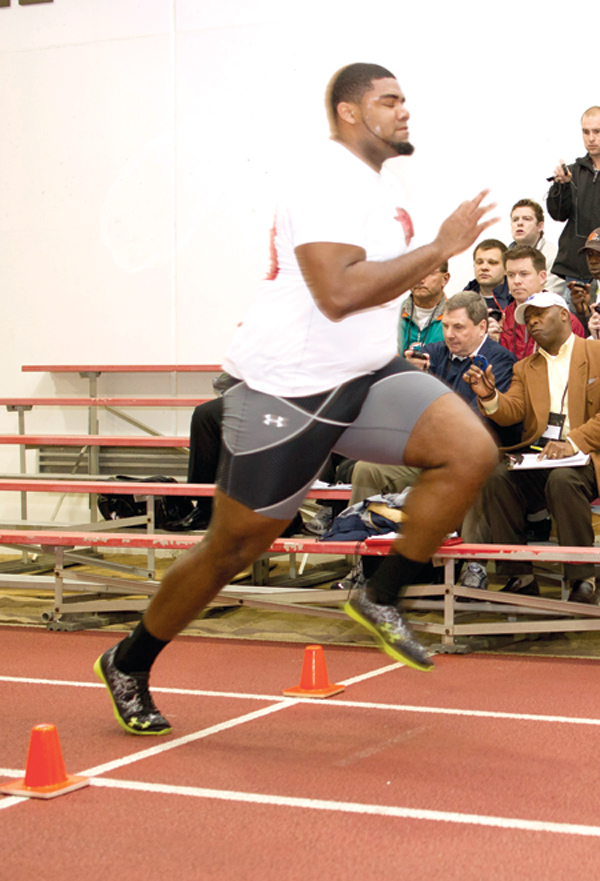 However, Gamble continued to work out after graduating from UGA this past December. Dominguez and Gamble, who played football and basketball together at BHS, have remained close and have encouraged each other as they prepare for the draft.

Dominguez said he was in Athens on Tuesday, March 22 to root for Gamble as he went through drills with other Bulldog teammates in front of pro scouts as part of UGA’s Pro Day.

UGA Coach Mark Richt had some very positive things to say about Gamble at a post-bowl game press conference.

“I think his career has been very solid. I think the NFL people really like him. They see that he can play inside linebacker, outside linebacker, special teams, he’s been outstanding in that regard. He’s been healthy most all of his career. He just has a big frame, and he’s a good instinctive football player. When it comes to linebacker play, some guys never have a good day like he had against LSU (in 2008) with the two [interceptions returned for touchdowns.] That’s what gets everybody’s attention, more so than a 15-tackle ballgame. It’s not surprising that he didn’t have another game that would outshine that, but he’s played a lot of really good football for us.”

Preparing for the draft

Both Dominguez and Gamble said they were anxious about the upcoming draft but were thankful for the support of fans and their friends families.

“You try to put your blinders on, because you never know what to expect on Draft Day,” Dominguez said.

While he has gotten kudos for his size, strength and tenaciousness, other analysts have criticized his ability, mainly for not being quite as athletic as might be expected for the NFL. Still, Dominguez said he has remained upbeat.

For Gamble, getting his bachelor’s degree in housing from UGA in December was a big off-field accomplishment.

“That was one of the main things about coming to college and wanting to come to Georgia—just to come and get my degree first of all and then perform on the field,” Gamble said at a January press conference. “It’s all been falling pretty good for me.”

Other Bearcats in the NFL

If Dominguez and Gamble are drafted or signed as rookie free agents, there would be four BHS alumni on NFL rosters.

James Butler, who was a collegiate All-American at Georgia Tech, plays safety for the St. Louis Rams and has a Super Bowl ring from his time with the New York Giants.

Malcolm Sheppard, who was in the same BHS graduating class as Dominguez but graduated a year earlier from Arkansas, is a defensive tackle for the Tennessee Titans. The Houston Texas signed Sheppard as a rookie free agent in 2010 and impressed coaches with his play on the practice squad before being picked up by the Titans later in the season.