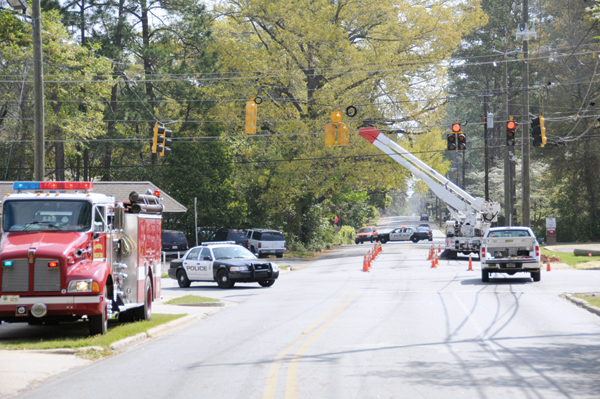 ALL OF FIVE POINTS—the area where East College Street, Scott Street and Tallahassee Highway intersect—was evacuated for about 90 minutes on Wednesday due to a major gas leak.

At approximately 11 a.m., a Georgia Power crew was digging in the right-of-way next to Family Bank and accidentally struck a city gas line. BPS officers set up detours around the area while city gas workers tended to the leak. The intersection re-opened to vehicle traffic at about 12:30 p.m.

According to City of Bainbridge officials, Georgia Power personnel were digging a hole to place a new power pole at the intersection when their auger hit a two-inch plastic line carrying natural gas. The lines are located about three feet underground.

Employees with the city’s Gas Department clamped the leaking line before shutting off gas flow to replace the busted line. They then fused the line back together, Utilities Division Director Ronnie Parish said.

BPS Fire Chief Dennis Mock said three businesses—Family Bank, Five Points Cleaners and the mini-shopping center where the Book Nook was located—were evacuated due to the potential risk of natural gas being ignited by a spark and exploding.

“Natural gas is a safe gas, which is lighter than air,” Parish explained. “Because it is so light, when a leak develops, the gas rises and disperses through the atmosphere, giving little chance for ignition.”

Just in case of emergency, though, officers had a fire hose ready to spray water on people working to fix the problem if something went wrong, Mock said.

City employees familiar with the incident said the accident happened because the gas line was not properly marked by Gas Department employees.

Although Georgia Power did similar work on the other three corners of Five Points without incident this week, the placement of small yellow flags to mark where the line ran in front of the bank was off.

“I will just say it was a questionable [line] locate,” Parish said.

“The safety of the public and contractors working around city utilities is of utmost important to the City of Bainbridge,” Hobby said. “We will do whatever we have to in order to ensure their safety.” 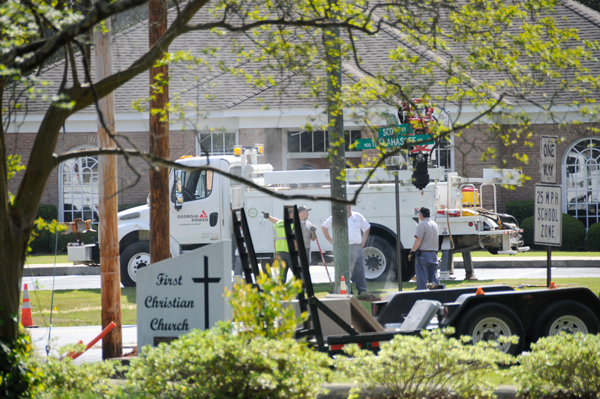